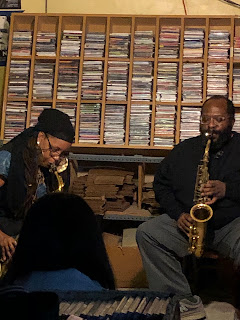 
This show was billed as the first time these two players performed together. Despite this fact, the two saxophonists seemed very comfortable with one another. The performance was a true musical conversation where they displayed harmonious fluidity rather than confrontation or a "can you top this" type of heroics. Jones consistently produced a deep round sound from his alto, and that is one of the signature features of his playing. Roberts countered with the higher tones she generally possesses. The near-capacity audience was delighted by the results. It may have been cold outside on this wintry NYC evening, but within the confines of the Downtown Music Gallery there was a lot of inter-personal warmth.

Matana Roberts is known for her often brilliant between-song comments about issues of social justice which feel deeply connected to her musical statements. On this occasion she referred to a recent news story that has garnered headlines, and she and Jones entered into an eloquent dialogue about the controversy. Their thoughtful and sophisticated conversation complemented their instrumental duet. Both Roberts and Jones provided insightful comments that underscored how their commitment to social justice informs their artistic expression and revealed the manner in which they processed the news story as details unfolded over the weekend. This performance also occurred right after the Arts for Art "Justice is Compassion" series in which Jones had performed several evenings as part of that festival.

I have had the good fortune to see both performers do sets at DMG in the past. One of the more intriguing sets a few years ago included an early solo version of "Coin Coin" by Roberts. Roberts and Jones have continued to appear frequently at DMG (but previously not together) at this popular Sunday night series in downtown Manhattan while both building ever-expanding public profiles and garnering the attention of major arts and academic institutions. Roberts held a residency in 2015 at the Whitney Museum of Art, and she is currently on the faculty at Bard College. Jones has taught at NYU and at Columbia University. This forty minute set was replete with highlights from start to finish. Music fans can hope that this performance, like Roberts's "Coin Coin" set, will be the first of many such future collaborative adventures for this visionary duo.