This past year has a been one of two halves for me, the first mainly listening to the many new and great albums that have continued to steadily pour forth, and the latter half discovering lots of old classics and not so well-known riches from the past that seemed to have escaped my clutches until now. If anyone’s interested, my current favourite of these is the Miles Davis live album We Want Miles. Anyway here are a few more albums that were still in my ‘in-tray’ at the end of the year. 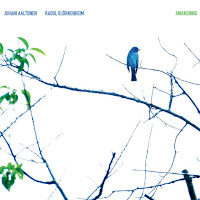 Here’s an album from two fellow countrymen who have both gained a wealth of experience over the years of playing with a variety of different musicians from all sorts of backgrounds. Although I should have expected it, as they are both fine pedigree improvisers, the thing that struck me on first listen of Awakening was the incredible musical communication between the two musicians. Above all the pieces, melodies, varying sounds, timbres, and techniques, was for me not just the communicative intent, but also the complete delivery of it. Throughout the course of the album the instruments converse on an equal plane and dance around each other’s patterns with freedom, ease, and confidence. Across the six pieces on the album Aaltonen’s flute playing is sublime and articulate providing Debussy-esque arabesques to Jethro Tull-like locomotive breath punctuations, as well as a variety of techniques including singing through the instrument (no mean feat on a flute!), rapid flutter tongue notes and passages to expressive vocal outbursts to mention a few. None of these techniques are exploited in a structural way or as an alternate sound source, but instead are delicate colours and subtle fluctuations on the unwinding melodic thread that unfolds throughout the album, being delivered with complete fluidity. Bjorkenheim’s guitar playing is the perfect foil for Aaltonen’s delivery, providing harmonic, contrapuntal and rhythmic counterplay to the proceedings.

Having reviewed Ruokangas’ album Mono and Dialogues with Henrik Hako-Rita earlier this year, Heikki has just released an EP containing four short tracks. From his beautiful acoustic melodic playing, supported by acoustic bass, and a subtle wash of keyboards, to his more out-there electric lead work, along with synth sounds and an unforgiving electronic drum patch. His guitar sounding a cross between Robert Fripp’s ‘Turkish Trumpet’ sound and the actual trumpet of Jon Hassell on the title track itself. The EP consists of what sounds like two tracks from two different sessions with the running order being arranged alternately, which provides a contrast between the material and the different sounding environments.

Here’s an album that I ‘clocked’ earlier on in the year when it first came out, but just didn’t get around to highlighting. I personally like both of these guitarists and their solo music, so I was interested to find that they had released these improvised duets as Lacrau. The five pieces on this album are of a good length and range from just under five to thirteen and a half minutes. The whole album has a very quiet and reflective manner with careful interplay and the accompanying sounds being placed not in a sparse way, as the melodic thread has much forward motion and the pieces are far from being static, but the calmness and slightly sombre mood of the music becomes the governing principle making for some very intriguing work. This is the first time that these two ‘cult’ figures have recorded together, so this is a real gem not to be missed. 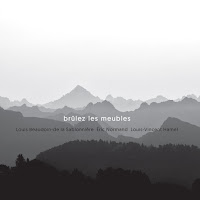 Again released earlier in the year, this interesting guitar trio hails from Quebec and provides us with some great explorative playing, moving between more written parts and freer improvised elements. Across the seven tracks some pieces are clearly written, being credited to individual members and containing more compositional devices, whilst others are credited to the trio as a whole. From structurally repeated phrases through to freely chromatic passages, the music is confident and delicate in an understated way and offers subtle use of colour, more bop orientated figures, skittering percussion, introspective melodic lines, driving rhythms, and more spacious moments. Their press release name drops Jim Hall, Bill Frisell, Sonny Sharrock, and John Abercrombie as possible influences, and although no one influence dominates, it certainly gives you an idea where there coming from. This one seems to have dipped under the radar this year, and didn’t deserve to, so dig it out and have a listen!