I was introduced to the playing of Olaf Rupp by my Free Jazz Blog colleague Martin Schray. He described Rupp's playing in a 2016 review, explaining that his "hallmark is that he plays the guitar in an upright position, reminiscent of Chinese pipa players. This way it’s easier to integrate flageolets, tremolos and arpeggios so as to create overtones and clusters." I have since had the opportunity to catch Rupp performing on electric guitar both with drummer Michael Wertmuller in a bombastic duo at the FMP exhibition last March, and in a colorful trio with Paul Rogers and Frank Paul Schubert. Both times were fascinating and quite different. Following suit, these three recordings showcase the guitarist in three much different settings, each time bringing something fascinating and quite different to the table. 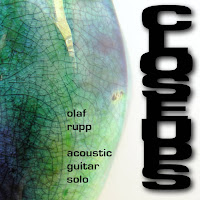 First up is an acoustic solo album on the classical guitar that finds Rupp exploring the full range of possibilities that the instrument offers. There are four tracks to the recording, each one seeming to be a search anew, each one with a different emphasis. The first track "Closeup 1" runs 23 minutes and is an evocative trek though the mind of the player. It begins with a brusque bright chord and continues with a stop and start array of approaches, from physically demonstrative slaps and taps on the fret-board to an extensive use of dynamics in contrasting single notes runs, chordal firecrackers, and rich arpeggiated passages. The second track, "Closeup 2" feels more deliberate, after a percussive set of appeggios, there is a possible bowing of the strings, a series of taps against the guitar body, and an extrusion of tones from the instrument that stretch to a near breaking point. It is a compelling collection of tones and ideas connected neatly through tension. "Closeup 3", is a short six minutes, but it's densely packed with a more structured chordal and melodic approach. It swings from classical through folkish and poppy sections before settling back into a classical theme that mixes dissonance and the attacks on the strings expertly. "Closeup 4" closes out the recording, it begins deliberately and slow, plucked notes are allowed to fully play out before the next set of interactions. Allowing the natural of decay of the notes to happen introduces a element of peace, even when punctuated with violent flagellation.

Hearing Rupp on acoustic guitar, and especially the nylon string classical, is revelatory. It's captivating to hear how he uses the instrument in a somewhat conventional manner, but extrapolates from this sound and language something uniquely his own. To keep it interesting for an hour is a skill, but to make the listener hear things anew on each listen is a true art. 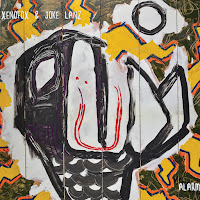 Berlin's A'Larme Festival is now entering it's seventh year, and each year grows stronger. My colleague Martin Schray and I have covered the event together several times. In 2017 he was on his own, and the had the chance to see Rupp's performance with his duo Xenofox, plus Joke Lanz electronics, which turned out to be the source of this new release. Xenofox is Rupp's collaboration with drummer Rudi Fischerlehner, which released Hundred Beginnings in 2016, and Lanz is a Swiss DJ, now living in Berlin, and leads the punk/noise/rock group Sudden Infant.

Of the concert, Schray wrote, "Rupp’s unique style with a lot of tremolos and arpeggios and Fischerlehner’s grooves were attacked by Lanz’ provocative intersperses, which created weird and crass beats ... the band was at their best in the quieter moments, when they created the atmosphere for the more dynamic passages." Listening to the album, minus the context of the visuals and the festivities of the setting, this description holds up, and the intense moments of this dynamic engagement are just as enjoyable as the quieter exploratory moments. Starting with "A Mouse in the House of Johann Strauss", the groups' empathy is apparent. They start slow, a tap on the drums, some strumming from Rupp, then an interruption from Lanz ... a snippet of voice, syllables, intensifying strumming from the guitar, in line with a galvanizing pulse from the drums. The track builds until entropy takes over and we're left with some ringing harmonics from Rupp and scratches from Lanz. It it unclear if the trio actually stopped between tracks, it's doubtful since this type of music is best expressed in the ebb and flow of energy and connection. Regardless, the second track, "Dehumanization Civilization" is quite different in its composition. The samples and electronics are at the fore and have a de-centering effect. On 'Switzerland a Cigar in my Hand', Rupp offers a delicate introduction, a sweep of notes, then a matrix of soft metallic tones for Fischerlehner's light percussive patterns. The group picks up and Lanz and Rupp engage in an intense interchange over a near hardcore drum assault. The quiet passages do offer something special, but perhaps it's the contrast with the intense moments that make this dynamic clash of sounds so engaging and a little maddening. 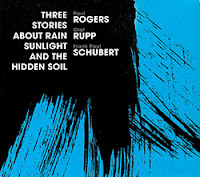 I was at first on the fence with this one. It is dense, there is a lot happening, and I was searching for the way in. Ultimately, it was the release concert that really opened my ears up to hear the recording. Seeing Paul Rogers man-handling his seven string acoustic bass, pulling sound of it every which way was a start. Hearing Frank Paul Schubert's saxophone work is uncompromising with its perpetual forward motion, both aggressive or subdued. In between these two, Rupp's guitar adds textures and tones, that feel like a connective tissue between the other matter, and adds percussive clatter to the mix.

The first track 'Rain' is a thirty minute improvisation that starts out with gusto and proceeds to travel through very peaks and valleys of intensity. The mid-point of the track is an exploratory run that is a high point of quiet collaborative listening and reacting, over an ostinato bass-line, Rupp plucks an array of notes, like dots of lights on a mountain range at night, as Schubert delicately outlines the think band of light over the peaks. The track builds back to the intensity that it began with, but differently. Now, it's a focused intensity, Schubert blows at the extreme end of the instrument and Rupp's guitar is blurting out thick lightly distorted tonal clusters, while Rogers throws in harmonics and rapid plucked lines. The following track 'Curry', begins with an open and lilting interchange of sounds. Schubert's tone is dominant at first, with quick lines often in the upper register, while Rupp and Rogers engage a give and take that keeps the foundation from solidifying. The trio proceeds to engage via several different approaches: Rogers offers sweeping pendulous tones, while Rupp digs deep into his bag of tricks and pulls out some surprising things, and Schubert delivers a reliable stream of melodic ideas. The third and final track, 'Yeast', begins with the musicians using the extremes of their instruments. Tappings on the fretboard, difficult to discern reverberations from the bass, and muted tones from the sax pool together as a swirl of small sounds that slowly (approximately ten minutes) gel.

Three Stories About Rain, Sunlight And The Hidden Soil became one of my favorite releases of 2018, it's diverse and uncategorizable music that continues to challenge me as a listener.

Add an author credit? Particularly disorienting when the article starts in first person....