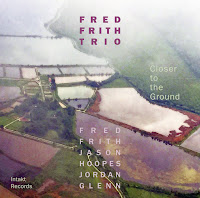 After the acclaimed Another Day In Fucking Paradise, this is the second album by the Fred Frith Trio, with the leader on electric guitar, Jason Hoopes on electric bass and double bass, and Jordan Glenn on drums and percussion. In the meantime, the trio has performed and toured together, as can be heard on the solid coherence of the three musicians to create one relatively unique sound.

In my younger years, Henry Cow was on my turntable, like so many other of the British prog rock scene, and interestingly enough, Fred Frith, then the guitarist of the band, took a long musical journey in line with my personal journey as a listener, to free jazz and free improv, although he's kept his rock-ish attitude to scales and sound. He's played with musicians such as Derek Bailey, Evan Parker, Hans Reichel (!), Henry Kaiser, Tom Cora, Lol Coxhill, John Zorn, Larry Ochs, John Butcher, Barry Guy ... and many more. Despite the differences in style and his approach to both music and his instrument, the collaborations worked, because the artists managed to find common ground and creative interaction without giving up their specificity.

This is very much a Frith album, despite the amazing work done by the rhythm section. The trio delivers a relatively accessible album - even if relative is a relative concept - of raw atmospheric pieces, clever, creative and dark, with hypnotic rhythms that come and go, with eery resonating shards of guitar piercing through an ominous sonic environment. I am not sure where the label gets the notions of "playful and intimate" to describe this music, but I can tell you that it's anything but "playful and intimate": it is somber and spacious. It is mostly slow and linear, with the only exception of the uptempo and short "Betting On The World", on which bass and drums get the chance to demonstrate their skills at a faster pace, with a phlegmatic Frith continuing to play one chord for each bar, yet the fusion fun gets rapidly destroyed by the harsh "Love And Other Embers" into which it evolves.  The central track "Stars Like Trees" by itself is already worth the purchase of this album: its crushing atmosphere is accentuated with odd rhythmic sounds like galloping horses, industrial destruction and ear-piercing chords, and is followed by a track that is almost as good, the long "A Path Made By Walking", which has the mad mesmerizing and psychedelic build-up of an early Pink Floyd song.

The music is hard to classify or to pigeonhole (luckily!): it is not jazz, not rock, not fusion, not noise either. It is something else: wayward, stubborn, recalcitrant, unpredictable, uncompromising, performed by three musicians who take their instruments beyond the boundaries of conventions to create something new and fascinating.