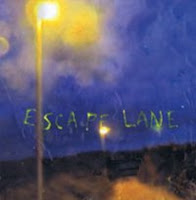 As regular readers know, 'the Bridge' series, is an initiative which creates ad hoc bands of American and French musicians. Escape Lane are Jeff Parker on guitar, Ben Lamar Gay on cornet, Joachim Florent on bass, and Denis Fournier on drums. The original band, formed by drummer Denis Fournier had Marquis Hill on trumpet, but he who was not available for the 2017 tour in Europe, and hence for their sophomore album.

The vinyl edition is twice a little over twenty minutes long, as you can expect, and a real joy from beginning to end. The French rhythm section turns the fully improvised concert into a rythmic post-boppish performance, joyous and intense at the same time, with sad bluesy overtones, especially at the end of the first side which continues on the second side, with a very moving trumpet solo by Lamar Gay.

But our attention goes to Jeff Parker, a very eclectic and versatile guitarist, who is as comfortable in traditional jazz guitar, and modern jazz as he is with the post-rock of Tortoise and the post-jazz of the Chicago Underground Quartet/Orchestra. On this album he again demonstrates his skills, as a solid accompaniment for the rest of the band, with wah-wah funky ideas and atmospheric moments on the second side of the album, but more importantly with a wonderful slow and equally bluesy solo on the first side. He is one of those guitarist who prefer precision and phrasing over speed. There is no showing off, no need to do anything but make great music.

And that makes this entire performance so great: it's nothing spectacular, not ground-breaking, but you listen to it as if you are part of the audience. It's intimate - with the occasional hesitation and a sound quality that is not always perfect, and maybe that's even an advantage, like old blues music where authenticity gets priority over sophistication - and the four musician go deep in their jazz history to bring a performance that is at the same time fun to listen to, modern, entertaining and very moving, with lots of space for individual soloing, which accentuates even more the strong collective interaction.