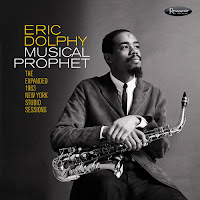 Last year’s archival releases included John Coltrane’s Both Directions at Once: The Lost Album a previously unknown 1963 session; however, Eric Dolphy: Musical Prophet, essentially a reissue of recordings from the same year, may have a certain priority. The sessions that originally produced Conversations and Iron Man (now supplemented with a CD of alternate takes, two takes of the previously unissued “Muses for Richard Davis” and the formerly released but misidentified “A Personal Statement” by Bob James with Dolphy and countertenor David Schwartz), marked a unique opportunity for Dolphy to document something of the breadth of his musical interests, with the freedom to record originals and standards in settings that ranged from solos and duets to groups of five to ten pieces.

Eric Dolphy led one of jazz history’s truncated lives; like Clifford Brown, Scott La Faro and Booker Little, he died shockingly early in his career. Though Dolphy managed to get to 36 while the others made it to their mid-twenties at best, he had only emerged from the shadows of Watts and Charlie Parker around 1958 when he was 30 years old. In the next few years he would be an indispensable figure in the free jazz revolution. A singular presence on: Charles Mingus’sCharles Mingus Presents Charles Mingus; George Russell’s Outer View, Ornette Coleman’s Free Jazz; and John Coltrane’s major works of 1961, Africa/Brass, Olé and the Village Vanguard Recordings. Dolphy was a key figure in the making of all of them, on some the precipitating figure. For Mingus and Russell, among the most formally visionary composers of the era, Dolphy seemed to become their voice; for Coleman and Coltrane, the highly distinct and central horns of the time, Dolphy managed the strange trick of being utterly distinct—both more and less traditional than either—from both.

After he moved to New York in 1959, Dolphy began to record with great frequency. His first recordings as leader were with Prestige, the label recording him as both sideman and leader, usually in relatively conventional quintets (only Out There, a quartet with Ron Carter on cello, deviated from the norm). The label was still releasing live recordings from the Five Spot and European venues in 1964 when Dolphy died. The only studio recordings he made under his own name between Far Cry (December 21, 1960) and Out to Lunch (Feb. 25, 1964) were these sessions from July 1 and 3, 1963, supervised by Alan Douglas for the FM label. It is the greatest concentrated body of his own music that Dolphy ever recorded, and only circumstances of release and copyright have kept it from being recognized as such.

Producer Alan Douglas was a genuine visionary who made great jazz records, sometimes by simply putting together great musicians. A year before the Dolphy sessions he had produced Bill Evans and Jim Hall’s Undercurrents and the Ellington-Mingus-Roach Money Jungle . This would apparently be the only time that Dolphy recorded his own music without to some extent fitting into a record company’s favored format. The first day’s recording was a session of duets with Richard Davis, producing enough material for an LP, a brilliant, ground breaking duet LP, a format that would be unlikely to appear in the Prestige and Blue Note catalogues and that here stretches both the language of the instruments and improvisation itself.

Two days later, Dolphy gathered 11 musicians in groupings from quintet to tentet to record pieces ranging from Fats Waller’s “Jitterbug Waltz” to Dolphy’s own raw and explosive “Iron Man” and “Burning Spear.” While Prestige and Blue Note seem to have avoided recording standards, Dolphy relished them, and here he gets to cover several, including “Alone Together” and “Come Sunday” with Davis and an unaccompanied solo version of “Love Me” with startling leaps between registers and keening end to end runs (among Dolphy’s great performances of standards is a version of “Stormy Weather” with Mingus that presses expressionism to psychodrama).

Time interacts in numerous ways with our perception of a piece of music: the circumstances—macro and micro—of our first and subsequent hearings; the duration and intensity of our listening; the seemingly ceaseless improvisation of memory. In a different way, there’s also the specific impact in time and a work’s general reception, its scale and assessment. For me, these Eric Dolphy recordings, essentially based on two original LPs, Conversations, released in 1963, and Iron Man, released in 1968, have different degrees of significance.

I heard Conversations when it was initially released, late in 1963 or early 1964. It would be the first record I ever reviewed. I gave it to John Norris, the editor-publisher of Coda to consider. He didn’t print it, explaining that Coda only reviewed records sent to them for review, but I was enlisted as a regular writer. Had the teeming horns of Iron Man appeared around the same time, I’m pretty sure I would have responded even more enthusiastically, the way I had toFree Jazz, the way I would to New York Eye and Ear Control, but I suspect FM (a minor label that released commercial folk music and mainstream jazz singer Chris Connor) was putting out the least “exceptional” material, just as they couldn’t figure out how to get an “outside” jazz record to its audience, given that Coda was just part of a larger scene, a welter of regional, marginal, committed outlets that FM wasn’t linked to (and that ESP would discover so magnificently a year later).

The significance of marketing now comes full circle with the three CDs and extensive booklet of the Resonance reissue. Dolphy is now a “Genius Rediscovered” on the cover of DownBeat, a major event in jazz media that need “mainstream” geniuses even if, like Dolphy, they were driven out of America 55 years ago, a musical brother to Bird and partner to birds, admired by Garvin Bushell—present on these recordings--who had played with Jelly Roll Morton, yet derided in the jazz press as “anti-jazz.” It would be nice, however, if there wasn’t something a little reactionary about this package, nice if there were a little room for a fact checker or a reality checker in the deluxe packaging.

Here’s a passage from an excerpt from a 2008 McCoy Tyner interview with John Kruth discussing the addition of Dolphy to the Coltrane quartet: “Jimmy, Elvin and I felt that we had built something and were still on that journey. We didn’t exactly understand where John was going in terms of adding Eric…Olé was one of the highlights of Eric’s presence.” In the daily hive of performance, it’s unlikely that a working musician will be intensely aware of chronology, especially 50 years later, but someone writing about the era might have some idea of the Coltrane band’s evolution. At the beginning of 1961, Steve Davis was still the quartet’s bassist. He was soon replaced by Reggie Workman who appeared consistently until the end of the year. Art Davis frequently appeared as a second bassist and was on Olé (recorded May 25) along with Dolphy (famously identified as “George Lane”), Freddie Hubbard, Workman and Davis. That same month (two days before), Coltrane, Dolphy and Tyner were recording portions Africa/Brass and putting scores together, with chords provided by Tyner and orchestration and conducting by Dolphy. On May 23, Paul Chambers was the second bassist; on the second session, June 7, it was Art Davis. “Jimmy” (Garrison) begins alternating with Workman during the marathon October-November stay at the Village Vanguard, but Workman is the bassist on the fall ‘61 European tour that included Dolphy and bassist on the last 1961 Impulse studio date (earmarked for Ballads). When did Jimmy Garrison have time to resent Dolphy’s sudden intrusion?

Robin D.G. Kelley’s detailed notes refer to a Fort Worth tenor saxophonist named Dewey Redmond, perhaps the father of the more famous Joshua “Redmond”? Much of the booklet consists of a long string of short interviews in which reed player after reed player, from Sonny Rollins to David Liebman, expresses great admiration for the practice regimen required for Dolphy to maintain his technique on his three very different instruments. Few--Marty Ehrlich among them--seem keenly aware that Dolphy was producing extraordinary music. Joe Chambers takes the opportunity to recall the endorsement of Stanley Crouch, of himself, not Dolphy particularly, (“The avant-garde was really what you were doing”) as opposed to the music Chambers refers to with “not to name names, but that certain other people who were known as revolutionaries were playing.”

A brief biography of another interview subject (the sole European) bears quoting: “Han Bennink is a Dutch jazz drummer who has performed with a number of American jazz greats in the 1960s including Dexter Gordon and Sonny Rollins.” Notice the weird tense, “has performed…in the 1960s,” as if the decade is still here. Not to trouble anyone with the idea that there is any post-Dolphy music out there, but what, one might ask, has Bennink done lately, in, say, the 55 years since Dolphy died? I don’t think I’m flattering the FJB readership by assuming anyone reading this has a pretty clear idea, from a half-century of the ICP to perhaps thousands of ad hoc formations including almost every major figure in free jazz and the free improvisation movement. But of course, Dolphy’s music, for many of us, wasn’t an end but prophecy that has fed much music since, embodying what Evan Parker named so succinctly in an album title “The Ericle of Dolphi.”

This conservative presentation echoes what happened to Dolphy and FM records the first time around. Conversations emphasizes the compositions of others, the small groups and the abstract interplay of Dolphy and Davis. There’s joy in Prince Lasha’s “Music Matador,” a Caribbean explosion with Dolphy’s bass clarinet whooping over the riffing woodwinds of Lasha, Sonny Simmons and Clifford Jordan, and it continues with “Jitterbug Waltz” with Bobby Hutcherson and an 18-year-old Woody Shaw making his recording debut. The second side of the LP presents Dolphy’s solo on “Love Me,” and an extended duet between bass clarinet and Richard Davis’s bass on “Alone Together” an astonishingly “free” duet that well might, with the Giuffre 3’s Free Fall, stand as a signal achievement of third stream and free jazz finding a common ground that continues to develop.
The music becomes far more intense with Iron Man and the appearance of the nonet and tentet (likely Dolphy’s only opportunity for large-scale orchestration following his brilliant beginnings with Coltrane’s Africa), but Iron Man didn’t get to reveal its riches until 1968, four years after Dolphy’s death, when record bins were stuffed with 1961 “Memorial” recordings, three years after the release ofOut to Lunch, as many years after Albert Ayler’s Spiritual Unity and Sun Ra’s more challenging music, even a couple of years after the release of Coltrane’s Ascension, the kind of saxophone maelstrom that Iron Man foreshadowed. None of Dolphy’s 1963 work will ever be commonplace, but in the rapidly evolving musical language of the times, Iron Man arrived in an utterly different context than that in which it was recorded, his radically visionary work seemingly only current.

Though this significant part of Dolphy’s music was effectively taken out of the active dialogue of ‘60s free jazz (it’s unlikely that the big band ever appeared publicly), that it’s now available, in one place, with its alternates and optimal sound, should still be celebrated.

I guess I am a day late but this is a masterful review. Sound research, informative detail, and an appropriately critical eye. Looking forward to giving this set a few spins.

Dear Stuart Broomer, Paul Lovens named a Double LP on his Po Torch Label "The Ericle of Dolphy". Maybe it was Evan's idiea.