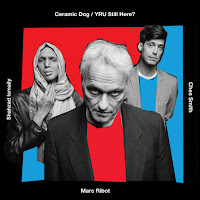 Guitarist Marc Ribot is a long standing favorite of mine. In all of his guises - whether the folk and blues solo work, his always spot-on accompaniment, the 'fake' Latin band, or the raucous Ceramic Dog with bassist Shahzad Ismaily and drummer Ches Smith, he always has something exciting to offer.

On last year's YRU Still Here the guitarist is pissed and political. This is a monster of an album full of hard-charging proto-punk/funk tunes and snarling lyrics, it balances political and racial drama with humor and sly takes on a myriad styles from the retro-robot funk of "Oral Sidney with a U", the Middle Eastern flavored "Orthodoxy", or the Neil Young's Trans/Ennio Morricone mashup of "Rawhide", and the Cubano Positizo's like "Pennsylvania 6 6666" with lyrics invoking brutality from Ismaily's childhood in an intolerant all American town. "Fuck La Migra" is a check on the early Trump abomination, and a angry fuck you to their mendacious policies. However, my favorite tracks are the straight ahead rockers, like "Shut that Kid Up". Sans lyrics, just guitar, bass, and drums it bristles with attitude that says as much about the precarious state of the world as the others. 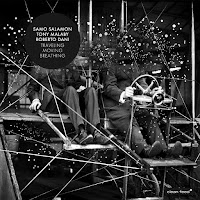 The interplay of musicians in a free improvisation setting is something that, even after all of these years listening and writing about music, still astounds me. What is it that makes a session work? I know that there are as many approaches to it as there are musicians, but, when say a trio clicks, they can really make some unreasonably good music together. Slovenian guitarist Samo Salamon works here with a free jazz saxophonist colossus on this recording - there is rarely a setting in which Tony Malaby does not impress, and the percussion work of Roberto Dani has fit into situations ranging from rock to theater to free jazz and has been working with Salamon for well over a dozen years. The sum of these parts more than meets the qualification of sounding reasonably good and go well into the unreasonably good.

Salamon goes for the jugular on several of the songs, letting the electric guitar marinate in distortion and heavy rhythmic passages. Malaby’s saxophone work runs the gamut, from the sounds of clicks and the compressed mouth pieces to soaring in the high register, to funky tattered passages. Dani provides both free and associative playing as well as driving straight ahead rhythms when needed. 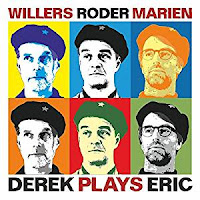 I am not sure of the percent of, or even which Derek and Eric we're talking about here - be it Derek Bailey, or Derek and the Dominos, or Eric Clapton, or whomever, but the playing of German guitarist Andreas Willers is absolute killer on this recording. The guitarist whose debut album was a solo album on the venerable German FMP label in 1981, is working here with bassist Jan Roder and drummer Christian Marien, and the result is a power trio that is both powerful and nuanced. The opening "Steampunk '69" is a crusher of an opening track - straight ahead rock rhythms, melodic excesses reminiscent of Live at Village Gate by Larry Coryell, The follow up 'Plodding Along' features a looping bass line over which the guitar delivers shimmering strokes. But maybe it's all a set up for the third track "Roost'r / Tunnel Boogie", where the slide comes out to devastating effect as the elastic groove perfectly underpins the swampy guitar playing. Then, the set up of "Gentle Maya: Dance of Maya / Eat Your Blues / Valedictory" is unmistakably John McLaughlin's Mahavishnu Orchestra's opus, and it incorporates prog rock a la Gentle Giant. The follow up, "Goobye Pork Pie Hat / The Marshall Needs El Juicio", begins with a pulsating straight ahead delivery of the great Charles Mingus song, but then erupts into guitar-hero shredding, which is just a whole lot of fun. "I Ain't Got Nothing But the Blues" is an acoustic blues / Derek Bailey mash up that makes no logical sense but works so well. Listen closely as well to the track "Laili", the guitar-bass tandem interplay seems like a slightly dirty secret. There is a ton of variety here, straight ahead rock fun and more than enough off the beaten path playing to keep you listening for a long long time. 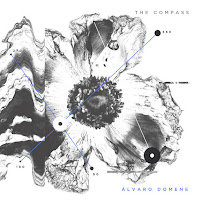 The next two records are the most experimental of the lot today, and in fact it's this solo recording from New York based Álvaro Domene that takes home the prize for being the most unusual. It's not so much an album of songs, though the tracks are all split up and named with some intention, but a reassessment of what a guitar can do. Sure there are sounds that border on metal, with sudden riffs like on Coulomb's Barrier", but these soon dissolve into squelches and smears of sounds. The track "EMS of Despair" starts with ambient tones stretched until they disappear, followed by tense partial arpeggios and tingling tonal clusters, and "Mudskipper" has an almost playful beginning with serious attention being paid to the whammy bar (or a pedal, I'm not sure if whammy bars are a much of thing anymore) bending tones before delving into a slightly more conventional solo over an apocryphal drone. The album was recorded without overdubs or multiple tracking, and there are times when Domene sounds like a frightful demolition team, but it's just him and his dark vision. 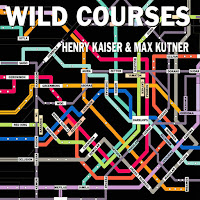 I'm typically a fan of a guitar duo. There is so much musical ground that can be covered, colors to be revealed, and ideas to exchange that there is a virtual endless array of possibilities. on Wild Courses, Henry Kaiser, a relentless and prolific musical explorer and Max Kutner ,who has a surprising array of projects going on as well, get together for a real celebration of the strings. The duo uses 12-string acoustic and electric guitars and an 8-string bass to create and thoroughly explore their musical world. The opener is gentle, "Lucky Fool", where Kaiser's bass provides not so much a solid footing, but random outcroppings that Kutner on a high-tuned 12-string uses to pull himself up. The interchange is delicate, Kutner's sounds is mandolin precise and ringing (reminding me a little of John Abercrombie's electric mandolin work). The follow-up "The Silence Wager" features two 12-strings, but one is searing and distorted while the other is tuned low and wanders windy paths through clusters of notes and tones. The bottom drops out on "Dreams Interpreted by Opposites", which is a spacious and ambient float interrupted by electronic squalls. Two tracks "Boot Mistaken for an Axe Sheath" and "Did it matter, does it now" are both acoustic duets with somewhat conventional song forms - albeit very 'somewhat'. The former begins with a interesting rhythmic riff, which the other guitar then joins with a counter melody of equal, but not exactly aligned groove. The two follow in parallel play, with implied connections. The latter is begins with a preconceived riff that is more motion than motif, but leads into a delicate interweaving of melodic ideas. 'Glider' introduces some slide guitar over a bluesy accompaniment - quite a contrast to some of the more experimental tracks, and a nice anchor in the middle of the recording. 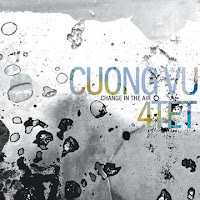 How had I left this album untouched for so long? I mean, this is the Bill Frisell album I wanted to hear after I picked up "Gone Just Like a Train" from a little record store in Hoboken back in 1998. At least that's how I felt the moment the track "Alive" picked up. Here was the guitarist playing with that Americana swagger and twangy Tele that brings tears to my eyes.

Seattle based trumpeter Cuong Vu has joined forces with Frisell before, in fact in 2016 they released Ballet (The Music Of Michael Gibbs) - and worked together over a dozen years ago on the trumpeter's It's Mostly Residual (Auand, 2006). However, like  on  Ballet, they are joined by bassist Luke Bergman and drummer Ted Poor, who each brought a set of recordings to this session. The aforementioned 'Alive', with the sauntering comping by Frisell and soaring melodies from Vu, is from Poor, as is the soaring "Lately", which features a lovely melody and a serene harmonic development.

The album begins with a standard that never was. Poor's "All That's Left of Me in You" is in title and spirit something of a bygone era, preserved in the pages of a Real Book for the next generation. Vu's solo is scrumptious and Frisell's accompaniment is perfectly balanced between comping and gentle splashes of color. However, the real prize here is Bergman's 'Must Concentrate', which in a short four and half minutes uses its hopeful melody to give Frisell and Vu to burst into (well contained) flames. Vu's "Round and Round" is a much freer piece, where there seems to be little but suggestions from the composer as to how accompany his open ended melody, and reprises two tracks later as "Round and Around (Back Around)", with a much more solid ending statement. The album is capped off with a composition from Frisell, "Far From Home", leaves a tinge of melancholy in the air. 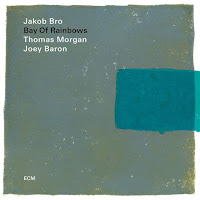 Here is a gentle coda to this round-up: the sumptuous sounds of Jakob Bro whose playing simply rolls and flows like a gentle waves in say, a Bay of Rainbows. With the help of Thomas Morgan's sympathetic bass lines and the deeply nuanced drummer Joey Baron, there is little that can go wrong, and little does. The album is a live recording from NYC's Jazz Standard in NYC from this trio which also released "Streams" on ECM in 2016. Bay of Rainbows also continues the deep collaboration of Bro and Morgan, whose playing together now goes back at least a decade. Bro is a master of using space and time to hone his songs. Morgan, similar to his work with Frisell on Small Town, engages Bro in a sophisticated tug of war. It never rushes, or is rushed, and it never feels drawn out or overdone - the waves are the result of a gentle, but insistent flow. Some standouts are the atmospherically thick and dripping "Red Hook", and the crunchy 'Dug", which bursts with restrained tension. However, it's not the stand-alone songs that matter as much as it is the confluence off the musical streams.