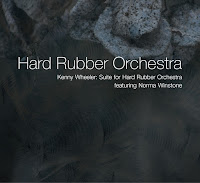 Kenny Wheeler's output as an artist is one that should be greatly admired. He collaborated with nearly everyone; from members of the jazz avant-garde to artists like David Sylvian. He remained busy playing and composing until the last year of his life, and even then his legacy remains forever in works such as this. The Vancouver based Hard Rubber Orchestra is a jazz orchestra that mostly tours Canada, playing original compositions a few times per year. This recording from 2016 is material that Wheeler composed for the group along with singer, and longtime Wheeler collaborator, Norma Winstone. My experience with Wheeler's music has been mostly centered around his ECM recordings, a label in which his music has served to support and expand its aesthetic. The 1976 album Gnu High served as my entry point into the ECM and Wheeler catalogs; it's an important record that showcases Wheeler's improvisational ability in a small setting. When I got around to the nearly two hour long Music for Large & Small Ensembles, I was blown away by the sheer composing power and intimacy Wheeler was able to produce in a "big band" environment. I see that same composing capability on this album, performed by some of Canada's finest and most dedicated jazz musicians.

The suite is made up of five sections with three improvisational duos in between. Lasting for about half an hour, this album seems to go by in the blink of an eye. The whole recording has a rich bombastic sound that transports the listener to the the dynamic atmosphere of a concert. "Movement I" leads with a swaying saxophone that is eventually joined with the array of horns, piano, and drums. Norma Winstone joins the conversation; her wordless vocals stimulate a back-and-forth that the other musicians eagerly respond to. Winstone's airy siren song builds in intensity until broken by a soulful, moody saxophone. This theme continues until the high energy finally, finishing up the longest movement on the album. One could mistake this as the finale, but the following bass and trumpet improvisation helps trigger a mysterious and anxious setting. The next two movements breath even more life into the music, Winstone and the trumpet solo on "Movement II" seem to be reaching up into sky beyond this terrestrial performance. There's quite a bit of swing going on here especially throughout "Movement III", as the music takes on an almost prideful summer feel. Winstone basks in this warm sunshine and leads the orchestra to rejoice in this same aura and comfort.

By this point I felt thoroughly surprised and ecstatic about this suite as a whole. I expected this to be a horn or trumpet heavy album, but in reality it's quite well rounded and eclectic in soloing and style. While all three of the improvisation sections do contain a trumpet, the duos are diverse in their approach and form. My favorite of these has to be "Improvisation II", as the piano and trumpet players seem to be on two totally different streams of thought. Normally I wouldn't find this to be preferable, yet they both find common ground and finish off as almost one entity. In those three minutes, these two talented musicians provide a narrative that is cinematic and engaging. "Improvisation II" is representative of the whole suite; while this album may take uncertain twists and turns, it always reaches the ideal destination. "Movement IV" expands upon that idea with smooth horn sections leading directly to a lamenting piano and mournful trumpet. The rhythm section adapts well too, as they're not as limited as they initially appear from the first few movements. There's a deeper dynamic going on that isn't readily heard on the first listen. "Improvisation III" focuses more on the trumpet and is probably the closest this record gets to achieving the atmospheric mood of ECM. The last movement sums up the performance in a very fulfilling manner, making some connections to the first movement along the way. The ending moments are respectfully grand without being pushy or excessive.

In many ways I wish this record was longer and that even more dynamic experimentation was displayed. Yet the short length allows multiple, relaxed listening sessions within a manageable period of time. Even after all these listens the music remains fresh, as if just plucked ripe from the tree of Wheeler compositions. While there isn't a clear focus on any certain musician or section, my ears gravitate towards the trumpet solos and Norma Winstone's voice. I'm sure there's some bias in there, but I also believe that without the necessary reinforcement their efforts would not be successful as they are. Thankfully those elements are present and serve as an integral support system for the risks that Winstone and the soloists are allowed to take. With all these creative excursions, one also discovers the captivating melodies that pitch their tents in the listener's ears. I often found myself humming some of the themes and musical phrases days after listening to this, without any sort of prompting. This suite is an excellent culmination of Wheeler's musical experience throughout his life, resulting in music that is exploratory while appealing to a broad audience. I'm not a huge fan of "big band" or jazz orchestras, but I trusted Kenny Wheeler to deliver and he surely did. This is not niche music, it's music for those who love to feel and are willing to take some risks along the way. Wheeler's music deserves to be played by talented devotees who translate his ideas into every note they put out. Hard Rubber Orchestra does exactly that.
Paul on Thursday, February 28, 2019
Share