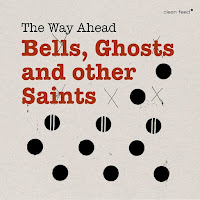 There has been no shortage of projects influenced either directly or indirectly by visionary saxophonist Albert Ayler; from guitarist Noël Akchoté’s spare, captivating interpretations to the raucous redesigns that Healing Force give to Ayler’s late period, such projects give testament to the immense power that pulses in every syllable of Ayler’s ecstatic musical language.

On Bells, Ghosts, and Other Saints, Scandinavian septet The Way Ahead draw on this language for inspiration; they borrow certain syntactical elements seen time and time again in Ayler’s music, “Aylerisms” if you will, but shape those elements into distinctly their own. One of the aforementioned Aylerisms that makes itself felt throughout the record is an exploration of melodies that, while compositionally quite simple, lurch to-and-fro with a barely-contained sense of exultation and frenzy. The closer “Bells, Ghosts and Other Saints” is perhaps most explicit in its homage to Ayler; its central theme swaggers by like a drunkard at a victory march, with all of the celebratory swaying and shouted hurrahs that entails.

In many of the compositions, there’s a sense of things hanging together by the merest of threads. Opener “Eclipse” illustrates this well: throughout the piece, each player seems to be locked into their own frenetic monologue - on first listen, it’s not entirely clear how the different voices relate to each other, or if they do at all. Nevertheless, close attention (and the the way that the composition itself stumbles into coherence) reveals the mad logic underlying everything; like a Cubist painting that’s been cut up into pieces, scattered about, and reconstituted from memory - there’s a structure here, but one would be hard-pressed to abstract from it an easily parsable blueprint.

Not all of the pieces are so hectic. “Lakenskrekk” moves at an unhurried pace, its central theme more romantic than rowdy. After evocative solos from tenor saxophonist Roligheten and bassist Høyer, trombonist Äleklint engages in a fluid, almost comic soliloquy that serves to undercut the otherwise somber atmosphere. “Tåkefyrste” is a brief foray into darkness, and is perhaps more downtrodden and sinister than anything Ayler ever recorded - nevertheless, it serves as a palette-cleanser, preparing the listener for the rollicking big-band explosion of “Skremmerud.” Here, after a recitation of the central melody, it’s off to the races - with Høyer and Østvang providing the foundation (which is probably better likened to a ship’s swaying deck), the players engage in feverish repartee.

Tributes to Ayler may be somewhat common, but ones that make an attempt to grapple with the underlying spirit of his music (while simultaneously saying something new) are not so easy to find. On Bells, Ghosts and Other Saints, the Way Ahead show that “tribute” need not be shorthand for rote repetition and a fixation on the monumental figures of the past - here, these seven formidable players from Norway and Sweden take Ayler’s unabashedly American music and imbue it with their own idiosyncratic touch, creating something fresh and incredibly enjoyable to listen to.