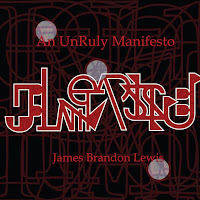 During Winter Jazz Fest 2018, I caught a whiff of saxophonist James Brandon Lewis' group that recorded An UnRuly Manifesto. At the time, I thought it was one of the best set that I caught at the festival and the recording does not dispel the notion.

Last year Lewis released a duo recording called 'Radiant Imprints' (see review below), that demonstrates his big, fiery, but never unruly, tenor sound with only the spare backing of Chad Lewis’ drums. On An UnRuly Manifesto he fronts a quintet, featuring his trio members (heard on No Filter from 2017) Luke Stewart on bass (check out Stewart’s own solo recording), Warren Trae Crudup III  on drums, and augmented by trumpeter Jaimie Branch and guitarist Anthony Pirog. In the spirit of the aforementioned recordings, the music here is a well considered blast of energy generously comprised of free, funk, and fact-finding parts.

The first track, "Year 59 Insurgent Imagination", really just an intro, begins the album with an appeggiated figure from the guitar and a slow melody from the two horns, it then settles into a deep ostinato, with a repetitive chord pattern and moving bass line on the title track. Branch delivers the first salvo here, a tuneful introduction of the melody, to which Lewis then replies. However, the restraint is palpable, and the first bit of tension is released when Lewis and Branch deliver a tandem melody. Finally, Lewis is let go. He begins building a ever fiercer solo statement over the rumble of Crudup's drumming and Stewart's bass. The 10 minute track is reminiscent of the modal 'spiritual' jazz, and is a wonderful gateway into the music of An UnRuly Manifesto.

Following this is another short introductory track, "Pillar 1 A Joyful Acceptance", a melodically soothing ride on the Love Boat for a few seconds before "Sir Real Denard"'s. tight funk groove. Stewart gives an abstract electric bass solo, tweaked with effects, that segues into a sensory guitar solo, then into a squishy trumpet passage. However, the whole time the action is with the drummer whose taught pulse and precise hits and rolls, is in ... umm ... harmolodicism with the others. "The Eleventh Hour", a slow burner, provides, at first at least, some relief from the intensity of the previous track. However, by mid-point, concentric guitar and bass riffs, raise the pressure quite a bit, pushing and pulling and playing with dynamics, and giving Lewis the space to stretch out with one of his earthy, funky, and simultaneously out there excursions. Later, "Escape Nostalgic Prisons" is a fierce freely improvised piece where the group goes for broke, but something in the interactions still keeps it grounded.

Perhaps that is what I like about this album the most - it stays rooted in fecund soil even as it stretches out, sprouting ideas and new lush greenery as it goes. The core trio of Lewis, Stewart, and Crudup, are pretty unbeatable team and adding the other instruments is a masterstroke. Pirog's guitar work is formidable but always serves to better the whole organism, Branch's trumpet work adds color and light. Final assessment: totally worth your precious pennies! 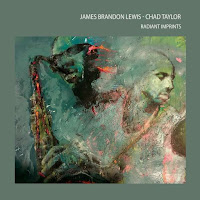 Drummer Chad Taylor is no stranger to the duo format. As one half of the ever engagging Chicago Underground Duo with Rob Mazurek, he has perfected the art of making the drums sound like a whole band. Saxophonist James Brandon Lewis' playing has a similar impact. Thus, on the duo outing Radiant Imprints, there is hardly a moment where you notice that it's only two musicians.

The album starts with the track "Twenty Four", where Taylor kicks off the track alone on the floor tom-toms. Then Lewis joins with an upbeat melody that had me thinking of his contemporary Jon Irabagon just a bit. Lewis delivers a seamless stream of musical thoughts and motives until he hands the spotlight over to Taylor who builds on the momentum further. The track "Loved One" follows with Lewis performing in the opening moments alone. The melody is defiant, but a little sad, which is to say there is a yearning embodies in its trip through the octaves. The track "Imprints" had me scrambling to see if it was an Impressions-period John Coltrane tune - it has a similar logic to it's construction, but at the same time is something all its own. Over Taylor's taught support, Lewis spirals outwards from this core, spinning a truly engaging and fiery tune. For a contrasting example, the Mbiri dominated "First Born" is an unusual and gentle duet - presumably lullaby - that exudes a different type of musical warmth.

Radiant Imprints is a fantastic and absorbing drum and sax duo that strikes a great balance between accessibility and adventurousness.