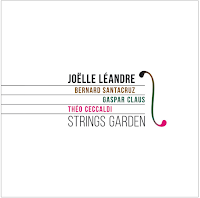 This 3-CD set is a collection of duos between double bassist Joëlle Léandre, an enthusiastic gardener, and other members of the string family. The recitals ascend through the registers and bear horticultural titles. She plays with Bernard Santacruz (double bass) on ‘Trees’, Gaspar Claus (cello) on ‘Leaves’ – performances from Paris and its environs in 2016 – and Théo Ceccaldi (viola and violin) on ‘Flowers’, from Warsaw in 2017. The duo is her favoured format, although she considers it the most demanding: like a mirror but also a duel, a place in which conversation finds its best balance and where the subtlest and richest relationships exist, yet always on hot coals. As with any drama, without conflict or variance, echo and opposition, there is no interest. For Léandre, live performance also matters, “The public is touched by this fragility, this energy, these bodies giving themselves to each other, this force.” The complex array of such risks and responses is heard right across these three encounters, criss-crossing the ambiguous line between divergence and shared expression, with each partnership inhabiting its own particular domain. All the performances are unamplified so that we hear the full range of natural timbres and overtones the instruments deliver.

The elegant cover design, typical of Fundacja Słuchaj! releases, merges the ƒ-hole of a string instrument with the stem of a budding plant, placed beside the names of the four musicians each above a string, four being the number on their respective fiddles of which there are four in kind. String instruments are made from trees and analogies with cultivation and the natural world – its abundant diversity, cycles of growth and decay, organic structures, etc. – are fruitful ways of considering the medium and processes of free improvisation, but it’s doubtful such thoughts were directly in the minds of the musicians while playing, and the improvisations on each date probably weren’t inspired by trees, leaves, then flowers. These are retrospective associations in respect of music which is essentially about itself, though potentially redolent of so much more as only something as abstract as music can be. Perhaps improvisation, when contemplated through the prism of nature, allows us to ruminate on things deep-rooted and eternal, free of artifice, like in a Zen Buddhist temple garden where the latent meanings of natural elements are disengaged and become reflections of ourselves. As Léandre has said, sometimes the music is stronger than the music.

On the first disc, a concert given at 22, rue Victor Massé, she and Bernard Santacruz survey the lowest registers of the string group. The double bass is the largest instrument and its deep resonances can be felt by player and audience alike, giving its assortment of slow-moving vibrations a very tactile appeal, the archetype of woody sound. This is why Charlie Haden played with his head next to the bass, so he could feel the instrument. And not just him: one night at the Five Spot, playing with Ornette, Don Cherry, and Billy Higgins with his eyes closed, he opened them to see a man onstage crouching with his ear next to the ƒ-hole – “Ornette was like, “That’s Leonard Bernstein!” And I was like, “Okay . . .”

There are no audible signs of such audience participation here, but the air seems to move visibly with the weight of two double basses as the duo become acquainted in ‘Tree No. 1’ (Santacruz left, Léandre right) moving from open strings into a gritty dialogue. During the performance, Santacruz utilises vibrations of all degrees: picks, snaps, slaps, buzzing on the fingerboard, taps and knocks on the body. He plays primarily pizzicato while Léandre mostly bows, a sort of contrast and compare of the two principal ways the instrument can be sounded as well as intensifying individual character. During ‘No. 2’, they work in reciprocal motion as Santacruz assembles tight note clusters in relief while Léandre carves out edgy splinters, and on ‘No. 3’ her declamatory, recitative-like line is set against his prickly cross-rhythms, distinct but each reinforcing the other. The bass is not just a mighty cedar; it can be transformed into a something having the scale of a bonsai tree, as on ‘No. 5’, in which both commence by playing arco, exposing the multiple oscillations of bow hair drawn across tensile wire, before dividing and exploring a mysterious realm populated by insect murmurs and unstable rhythms. ‘No. 6’ leads with Léandre’s wandering tune, now languid, now agitated, shadowed by Santacruz’ solid, reverberant plucks; a duologue in two tongues.

The set with Gaspar Claus on cello was recorded at Le Triton in Les Lilas, whose website has a video of the performance. From that we can hear how the duo’s rapport became more adventurous as they progressed, beginning with pieces in empathetic twining that underline the kinship of their instruments. Interestingly, the sequencing differs on the album – for example: the second improvisation is moved to the penultimate position – a presentation of the duo’s relationships which is less a curve, more a series of balancing contrasts. (It’s a pity their final number has been omitted, that concludes with a dreamy, quasi-Baroque chaconne, impassioned then slowly ebbing away to the accompaniment of Léandre’s soft humming.) A number of the pieces are dominated by rolling, overlapping arpeggios and impasto chords, closely spaced layers thick with string sonority, from which there emerge snatches of Andalusian melody on the cello as if caught in the wind. Elsewhere, there are rustling creaks and twittering high notes, filmy textures and percussive exchanges as the pair jointly explore the available ground. Claus even resorts to playing the end pin of his cello.

At times, Léandre is inspired to sing while she plays. There’s something significant about the voice, which quite literally gives voice to something different in kind from the sound produced by external instruments. The human body, using its principal means of expression, is itself the instrument and that seems to give singing a special expressive status when it bursts forth above purely instrumental activity. With Léandre, it introduces a new emotional pitch and adds an extra dimension though quite often it’s not really singing, more chanting and incantations: words without meaning that make a different sort of sense, recited like spells, and moans and cries that have a theatrical presence as if the stage were converted into a ritual circle drawing on the magic of the spirit world. Part of its power is that it defies explanation, but we hear the effect in ‘Leaf No. 7’ as her whispers grow to throaty exhortations sounding out over the duo’s gutsy bowing, injecting a soulful urgency.

And so to the DZiK venue in Warsaw, where Léandre is joined by Théo Ceccaldi, switching between viola and violin, another step in their journey after the wonderful Elastic (Cipsela, 2016). With its use of folk-like material, this performance occupies a more homogenous world than the others in the set, having the warm intimacy of chamber music. The viola’s velvety tone has appealed to many, from Mozart to Mat Maneri, often in music of a melancholic nature. Certainly, some of these pieces sound as if they spring from a deep sense of mourning. Throbbing, melismatic figures on the bass are repeated without resolution or respite, a setting over which Ceccaldi unfurls dark lamentations, drawn out in long arcs, in a ceremony that seems to offer some solace. On ‘No. 5’, Léandre creates a tracery of harmonics and lightly grazed strings to support his sorrowful phrases, piercing more fiercely as they climb.

Such tracks are interspersed with different kinds of string work. ‘Flower No. 1’ is a web of shimmers and refractions; ‘No. 3’ an exercise in plucked cross-pollination; ‘No. 7’ consists of a patchwork of swelling notes, scuffles and taut staccato interjections; and in ‘No. 8’ the pair set up an antiphonal exchange of biting double stops, pushing at one another until they move into a region of quieter intensity. On the final track, Léandre’s bouncing, scratchy bow provides a rhythmic counterpoint to the violin’s serene melody, blooming and becoming more florid as it moves higher. The piece ends with a diminuendo in which the strings merge and gently dissolve into air – it might be said, like cherry blossom – in an amalgam of sound, sight and feeling. A poignant conclusion to this recital and the collection as a whole, deserving a place alongside the best of Léandre’s duo recordings

The set can be ordered, and is available as a download from Bandcamp.

Part of another performance by Léandre and Santacruz from Le Triton in September last year, presumably to mark the release of this album: