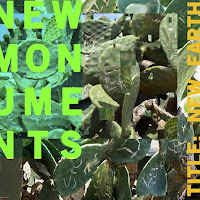 Following you own path is, most probably, the shortest way to become unpopular. It happens in real life and also in the music business. The three musicians that have just released the fourth statement as The New Monuments (Don Dietrich on tenor sax and electronics, Ben Hall on drums and C. Spencer Yeh on violin and electronics) seem to achieve exactly the opposite: making a career by just following their path.

I first listened to Ben Hall through the small rotation of musicians then called The Graveyards. The Graveyards had their moments of brilliance but they seemed determined to record and put out trillions of CDRs, cassettes and some vinyl. I might be a bit picky here, but if only their discography had been minimized to a third or even half, we would now be talking about one of the most important groups in experimental music for the 00’s.

There isn’t much to say about Don Dietrich that hasn’t been said or written. Even though I’m not a big fan, Borbetomagus radicalized free jazz, combined elements of noise with jazz before even the former term existed musically. Altogether they broke all boundaries.

I really enjoy C. Spencer Yeh’s denial of letting himself being confined to one genre or sound. First listened to him through his work will the mighty Flaherty-Corsano duo, but since then he has easily defied any categorization. Call it noise, jazz, electronic experimentalism, whatever you want.

All the above have delved deep into the New Monuments’ all-is-possible sound approach. This time, through Nate Wooley’s Pleasure Of The Text label, they put their electronic side up front and leave not so much to all of us sax aficionados. Do not get me wrong though. New Earth is, first and foremost, a free jazz blowout of high energy and pathos. Ben Hall struggles to follow the pace of the other two. His work on the trap set seems amazing to my untrained ears, a barrage of polyrhythmic mayhem equal (and that is something) to the saxophone of Dietrich. Maybe judging more from my jazz perspective I enjoyed all his gestures. His playing is certainly jazzy but in the loose way the free jazz tradition managed to liberate all percussionists. It sometimes seemed that there wasn’t enough room for him to breathe musically, so he constantly tried to make something of his own.

Knowing that this is an antithesis to their collective playing, I must comment that Yeh and Dietrich seemed to be the leaders in New Earth. They tend to dominate the trio’s sound with great use of electronics, which, to be totally frank, is to me the only disadvantage of this excellent recording. Sometimes the sound of New Earth is all electronics and drums, losing the organic unity they have achieved in previous recordings. Maybe it’s a new path they try to experiment with. We’ll just have to wait and see. Until then I really enjoyed New Earth, especially the parts were they seem totally loose, free and aggressive with their instruments and less with electronics. The parts, like most of the sixteen minutes of the opening track Old Monuments (now that it think of it, is this track a way to wave goodbye to their old sound?), were Hall’s percussion is matched with Dietrich’s tenor sax and the struggling screeches and noises of Yeh’s violin, are utterly satisfying.