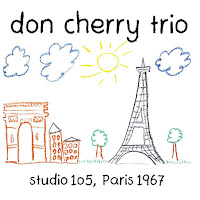 I dare you to listen to this record and not smile at least once. This record is light, enjoyable and full of Don Cherry. Just like Cherry at his best, it is fun, doesn’t take itself too seriously, and is wonderfully free.

This record showcases Cherry at a point of change. He’s transitioning from the US to Europe—from the free jazz element to something approximating free, improvised world music. Spiritual jazz as some people have called it. His cornet playing is spot on, but so are his other more eccentric musical instrument choices. (Though I’m always cautious of the gong, its use in 'Infant Happiness', followed by a killer coronet performance is spot on).

This record is a veritable time capsule. It’s Paris in 1967 and Cherry and his trio are performing on French radio. A young Karl Berger, who would later become well known for his role in starting the Creative Music Studio, is playing vibes, marimba among other percussion instruments. Drums are performed by Jacques Thollet, known more for his work with the Palm record label, based in France, founded by Jef Gilson and active in the 1970’s. They are all at the peak of their game, laying the groundwork for the spiritual, otherworldly jazz that is to come a few years later. The pieces sometimes have an unfinished feeling, probably because it is a radio recording, but also because this is just the start of the inventive music to come in the years to follow.

The record is classic Don Cherry—fast, eclectic, with hardly any moment of rest. This performance’s music is bright, vibrant and full of fast paced texture. Though at times the coronet provides moments of solemnity, it’s invariably followed by a joyful explosion of colorful sound. And if there’s anything to criticize about the music, it’s that. The record could have had a few more moments of silence, quiet in amidst the frantic rhythms. But perhaps that betrays the music’s origins as a radio broadcast; it might have been easier for audiences via radio to have listened to a fast-paced piece, instead of a more contemplative textural drone, as some of Cherry’s later music is. And, the performance is a laboratory of sorts—the musicians are trying to get out everything they can.

Though I normally only listen to music at home, this time I happened to start listening to this record while wandering around the city, taking the train and walking around. Without even noticing, I had a kind of bounce, a skip in my step. It was the perfect music for a bright and sunny day, full of potential. It’s enjoyable and approachable and doesn't take itself too seriously. A wonderfully Cherry album.