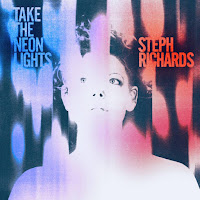 Fullmoon , last year’s formidable debut release from trumpeter Steph Richards, turned a lot of heads with its audacious concept and Richards’s stunning technique. Though barely over 30 minutes in length, that album, which featured Dino J.A. Deane in electronic dialogue with Richards in making sonic landscapes both transfixing and forbidding, put Richards on the map alongside some of the superior trumpet innovators of our day—musicians like Susana Santos Silva, Peter Evans, and Nate Wooley.

As good as Fullmoon is, it is perhaps an easier album to respect and to appreciate than it is to love; it has a very experimental aspect, and although it’s well-crafted and impressive in its execution, and even offers some fleeting moments of beauty, the overall mood of the record is rather cold and austere. All of which makes Richards’s sophomore release, Take the Neon Lights, so astonishing. For this music exudes a warmth that makes it a much more inviting record, even on the first listen. But the fact that it’s a more accessible recording takes nothing away from Richard’s artistry; indeed, what’s notable about this album is the way in which her creativity and imagination as a composer complement her fearsome instrumental technique so effectively, making music that is both virtuosic and beautiful in equal measure.

Richards draws deeply from her love of poetry here, and she’s taken inspiration from Langston Hughes, Maya Angelou, and Allen Ginsberg among others for each of the album’s eight pieces. The title of the album and its opening track, for example, is taken from Langston Hughes’s “Juke Box Love Song.” Richards decided to use a quartet for this record, with conventional “jazz” instrumentation: pianist James Carney, bassist Sam Minaie, and drummer Andrew Munsey. Although Carney uses a bit of prepared piano on a couple of the tracks and Richards employs a prepared trumpet on “Brooklyn Machine”—really effectively, I might add, as you will listen to this track at least two or three times in disbelief that there’s no overdubbing on it—that’s about the extent of the technical curveballs here. The bulk of the album is simply superb, top-shelf improvising around Richards’s fluid, open-ended compositions.

Some of the tracks jump right out at you: “Take the Neon Lights” and “Brooklyn Machine” at times possess an irresistible rhythmic momentum. But even these pieces don’t rest on melodic foundations as much as fragments and structures that can remain as malleable as possible: ostinato figures and thematic motifs come and go, rhythm and tempo contract and expand, and the result is music that is continually in motion, continually evolving. You won’t find yourself humming along to these pieces, but you will go back to them again and again to appreciate new dimensions of their engaging complexity.

Other tracks are just as riveting, albeit using a less direct approach to make their presence known. “Time and Grime” stays at a low simmer, with Minaie and Munsey keeping a loose pulse going as Richards and Carney exchange ideas back and forth, while the haunting “Rumor of War” is much more abstract, with Richards’s emotive trumpet floating ominously above the rest of the quartet’s elusive surface. But the lengthiest pieces, “Skull of Theatres” and “Stalked by Tall Buildings” are especially captivating, each at over ten minutes, giving the four musicians plenty of room to explore Richards’s capacious creations. They both have the feel of a long, winding journey, taking the listener through a range of emotional and rhythmic registers that never fail to sustain interest, and in which the four players work wonderfully together as a finely-honed unit.

Making quite clear that she is not merely to be regarded as an “experimental” musician, Richards’s Take the Neon Lights is sure to garner wider interest and visibility, and that’s all to the good, as her music has so much to offer.