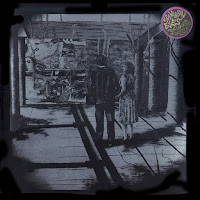 When you look up on discogs for Four Variations On Artificial Society, you find it categorized as noise, industrial, free improvisation, free jazz and ambient. By immediately discarding the latter two musical styles, you definitely get an idea of what you are about to listen.

A few months back I attended the three day Wolf Eyes/Universal Indians and friends residency at London’s Café Oto and I must remind to all of you (like me) suffering from reviews overdose, that most of it was a blast. The line-up of Nate Young, John Olson, Aaron Dilloway and Gretchen Gonzales-Davidson (the same on this recording as well) put on a performance of industrial beauty more than once. I found Young’s surrealistic poetry a key element to all this, an element truly missing from Four Variations On Artificial Society.

I have to be honest and admit that since I’m a fan of Eyes’ music, it’s difficult to make truly subjective thoughts about their music and its impact and aesthetics. But, by watching them live for the first time, I realized that their lyrics play an integral part to what they do, a part missing from this recording. So, in case you missed it, I was being ironic and skeptical when I mentioned, in the beginning of this piece, that the music on this recording can be easily categorized.

Thankfully it’s not that simple and this recording, after repeated listening, has a lot more to offer. The cd contains of five tracks (unlike vinyl which has four side-long tracks), all of them named after their length. The first track, the longest one, marks a lazy start for the album. Its noisy atmosphere sounds like an aggressive power electronics group trying to imitate the Wolf Eyes sound. Sixteen minutes of atmospheric murk made by all sorts of electronic devises. As the tracks progress, the quartet seems more focused and relaxed. John Olson’s sax presents itself as a key element of their current sound. I hear harmony and melody in reverse. Another attack on normality maybe or even on categorizations.

A lot of feedback consists their current mood, while rhythmic machinery constitutes one of their most industrial releases in their entire career. On track three reverb takes over to alienate the listener from the warmth (i must remind you that I’m a fan) of their music. On track four rhythms coming from the early days of industrial music dominate over some distant dystopian voices and a sax struggling to be heard. But on track five the saxophone takes over completely, followed by reminisces of their early cheap electronic equipment (and they sound it produced) days.

I started this review by implying that this album sounded like a summary of their sound. Those were my early thoughts when I first listened to it. I felt disappointed. By the time I started to listen over and over I found myself in a position of realizing that their vision has not yet waned. It has just simply mutated into something else, a new vocabulary that consists more aesthetic choices than noise even though back then noise was urgently needed. Just put on more Young’s cut-up like lyrics please guys.