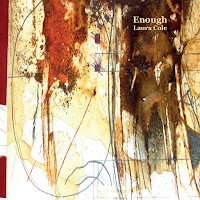 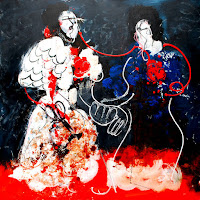 I sat with these records for many months, attempting to pierce the veil, as it were. Not because British pianist Laura Cole’s music is obscure; on the contrary, her composition style is quite direct and open. Instead, I’ve been taking the time to pierce my personal veil, to pass through my initial surface impressions—extremely positive—to try and reach the core of Cole’s music. To call Cole merely thoughtful does a disservice to the purpose and message of her music: instrumental to her work is a mutually supportive community that strives and struggles collectively, raising each other up like sparks.

This year, Cole released two dramatically different albums. Enough is Cole’s first solo piano album, spanning two discs: “This Is Water,” a collection of compositions by thirteen different artists; and “As Warm As the Sun,” thirteen compositions and improvisations by Cole. The Two Fridas, a double album featuring Cole’s octet Metamorphic, with Kerry Andrews on vocals, Chris Williams on alto, John Martin on tenor and soprano, Ollie Dover on bass clarinet, Seth Bennett and Ruth Goller on bass, Johnny Hunter on drums, and Cole on vocals, piano, and Rhodes.

Despite the difference in sound between the two groups, the singularity of Cole’s musical voice clearly marks both. Metamorphic has been termed a folk/jazz group, though I think that designation may be a little misleading, depending on how you read those genres. It seems one only in the sense that John Stevens and Dave Holland’s 1960s-70s work was folkish. In fact, Stevens seems an important landmark in making one’s way through Cole’s music. Much of Metamorphic’s music brings to mind the Spontaneous Music Ensemble, especially the lengthy improvisations that emerge throughout this album. This is partly due to Hunter’s skittering, percussive style that’s reminiscent of Stevens’s sometimes loose, open playing. But also, there’s a clear through-line to draw from Stevens to Cole and Bennett’s roles in Julie Tippetts and Martin Archer’s ensemble, and that connection seems more pronounced on The Two Fridas than on past albums. Take “Charcole I” and “Charcole II,” two recordings of the same poem, on which Cole takes the lead vocal and the group performs radical, occasionally spiky improvisations.

In many ways, The Two Fridas calls to mind recent chamber-vocal albums by pianists Kaja Draksler and Cathlene Pineda. I had a chance to review Draksler’s octet album , but we did not write up Pineda’s Passing: A California Suite. All three artists create music that explores issues of motherhood and feminism, art and creativity, and the role of an individual within a community (there’s that inescapable word again!). And so when Cole interpolates “Little Wing” and “Lonely Woman” into “Little Woman, Lonely Wing,” the deftness of her composing places her nicely in line with Draksler and Pineda, two pianists who can be equally irreverent and moving.

What’s fascinating about Enough is the many ways Cole brings her community into a recording of solo piano. On the first album, “The Is Water” (its title referencing David Foster Wallace’s famous speech of the same name), Cole arranges and performs a set of compositions mostly from fellow players. To get a clear picture of the range, it’s worth sharing the full list of composers: Martin Archer, Seth Bennett, Miles Davis, Ruth Goller, Nikki Iles, Sarah Jewell, Kim Macari, Robert Mitchell, Corey Mwamba, Julie Tippetts, Chris Williams, Alex Wilson, and Jason Yarde. Cole’s arrangements, and the warm, close recording by Spencer Cozens, brings each piece to life, her playing at times reminiscent of Don Pullen or Myra Melford.

Tracks like “Outgoing Vessels” and the bracing “The Two Fridas”—or the lengthy “forgotten letters; Bereft; Tears: bright grey” and “Digging for Memories”—take listeners to some deep spaces, inspiring and conveying both contemplation and introspection. The very slight difference between external and internal reflection implied there says much about Cole’s music: there is a consistent inside/outside perspective. One gets the feeling that Cole is both working through something and guiding us along, progressing towards a fuller understanding of ourselves and the world. Again, I’m reminded of Stevens, of the gentleness of even the most angular and challenging of SME’s recordings. Cole, like Stevens, makes it seem easy to be this open, but as close listeners, we know nothing is that simple.