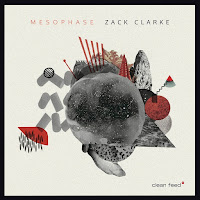 On his last release for Clean Feed, 2017’s excellent Random Acts of Order , pianist Zack Clarke transmitted his unique musical vision by way of a trio - double bassist Henry Fraser and drummer Dré Hočevar. On Mesophase, his latest, the ante has been significantly upped; while Clarke himself handles piano and electronics, there is also Chris Irvine (on cello), Charlotte Greve (on saxophone, clarinet, and flute), Nick Dunston (on double bass), and Leonid Galaganov (on percussion, waterphone, and shakuhachi). With this expanded lineup comes a more exploratory and varied approach - drawing as it does from the wells of process music, minimalism, and contemporary classical, Mesophase slinks along at the outskirts of “jazz,” offering it a compulsory nod or two (see: “Reticence”) without ever being completely beholden to its conventions.

With its pastoral flute, burbling electronics, and snippets of birdsong, “Curtains” is a shimmering introduction to Clarke’s sound-world. When a series of convoluted piano figures finally burst through at the piece’s mid-point, though, it’s as if the titular curtain has been furiously brushed aside - while Galaganov’s busy percussion and Dunston’s rotund bass-lines roil underneath, Greve switches to saxophone and sends out a series of urgent, uneasy cries. As its title suggests, “Generative” is largely devoid of a clear-cut theme or a straightforward progression - Clarke’s aqueous electronics gurgle, Irvine’s cello whines, and Greve lets loose a harrowing clarinet soliloquy. After a rather cacophonous crescendo, the second half of the piece descends into a wash of digitized sound. “Tilted” is similarly hard to grasp; listening to the first half is akin to walking through a funhouse, with Clarke’s notes falling about in dizzying, claustrophobic cascades and Greve sounding like she desperately wants to find the exit. The second half is spacious and unsettling, especially the way in which Irvine’s cello skitters wildly through Clarke’s blanket of electronic noise. In “Infiltration,” similarly dense electronics threaten to consume Irvine’s haunting lines, while “Assimilate” finds Clarke using such sounds in more subtle ways - as jagged, slow-rolling pinpricks to cut through Greve’s effervescent flute.

In the midst of all this, “Beggar” acts as something of a palette-cleanser, with Clarke and Irvine engaged in a dialogue that is, when compared to the dissonance of some of the other tracks, quite pretty. Likewise, “Reticence” finds Clarke engaged in a pleasant romp of sorts, Dunston and Galaganov accompanying him with free-wheeling rhythmic support. Greve’s pastoral flute-work adds another layer of insouciant lightness. If not for the barely-there sheathes of electronic sound that murmur disconcertingly in the background, the piece wouldn’t be out of place playing in your local café!

On Mesophase, the group’s ability to effortlessly juggle free-form abstraction and, occasionally, more traditional modalities is admirable; nevertheless, I found myself wishing that the players would “let loose” more often. For the most part, they simmer and seethe, and I was left longing for a more prolonged outburst or explosion. In any case, what Clarke and his group have made here is equal parts enthralling and unsettling, and it’s an excellent example of the ways in which electronics can be used to shape and even distort the atmosphere produced by acoustic instrumentation.
Paul on Tuesday, February 12, 2019
Share