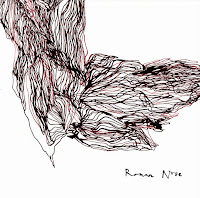 
Singing Knives is one of those eclectic independent labels that deserve all the attention it can get. Coming out of Sheffield, UK, it has a small but very adventurous catalogue, you could describe it as a very typical (or certainly a-typical) child of the totally free second wave of British improvisers from the late 70’s and early 80’s. By owning a great part of the label’s catalogue, I’m pretty well steeped in drones, free jazz blowouts, folk experimentation and various improvisations. I definitely urge you to look them up!

Roman Nose’s first LP took a while in the making. The recordings that make the two vinyl sides were put on tape during autumn of 2014 and 2016. I’m easily led to think that the finances of the situation are the one to blame for this delay, as almost always. This new quartet consists of label’s head Jon Marshall on tapes and electronics, my current favorite double-bass player Otto Willberg, Sarah McWatt on flute, vocals and various others and Charlie Collins on drums, percussion and waterphone.

For some years now, centered around a rotation of musicians, Sheffield has been a hub of adventurous (thankfully not in the hip way that Wire would present it) experimentation and Singing Knives provides to all of us, living far and away from this idyllic city, a way to catch with the results. This LP is the latest statement. Having listened a lot to label’s group’s like Hunter Gracchus and Chora, I wasn’t surprised by the intensity of this recording or the way they build up their sound, second by second. When playing collectively (pretty much on the whole of the album) they tend to be loud and full of energy. Collins drumming works in two ways. It provides a very solid backbone to all the tracks, while it moves in different directions at once. He seems to be in a constant dialogue with all of his fellow musicians, either in pairs or (more often) as a quartet. Willberg’s double-bass is a humble and discreet presence (sometimes even inaudible) adjusting totally to the collective nature of the album. Marshall and McWatt fill the gaps and link the dots with their intensive and focused playing. During the many listens of the album, I often wondered how do they manage that and stay (or, at least, feel like ) really loose and playful. Maybe it is the interaction, which is always a promise of a great gig.

If I could nag a bit, I’d say that I heard a lot of crackles for a new record but since I’m not reviewing for discogs, I must admit that this is improvisational ethos for sounds is presented preferably live. So, guys, please come to Greece too.