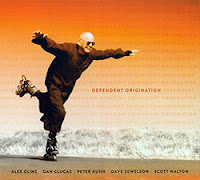 "Dependent origination” is a Buddhist concept defining the existential linkages between and, therefore, interdependency of separate phenomena or dharmas. Very simply put, it speaks to the interconnectedness of being (and occurrences) and the potentiality of reemergence. For reedist Peter Kuhn, Dependent Origination – the album and group – embody this concept of linked actions and rebirth in a literal, as well as ethereal, sense. This group marks his return to music after nearly three decades of musical silence. Formed in 2013 with slightly different membership, Dependent Origination now consists of Alex Cline on percussion, Dan Clucas on trumpet, Dave Sewelson on baritone saxophone, Scott Walton on bass, and Kuhn on reeds. All of the music on this album was recorded live on November 6, 2016 at the Center for the Arts in Eagle Rock, CA. In a nod to the contingent implications of the title, all the music is also improvised.

The first track, “Aspiration,” begins as a convocation. A bell chimes. A mournful saxophone follows. The rest of the band fades in, slowly building the song into a free blowing tempest churning atop Cline’s restive percussion. At nine minutes, the song transitions from heavy sound to spacious, intermittent, and resonant colloquy. As through the rest of the album, Cline is the binding force over which the horns and bass riff. More than anyone else, he turns the collection of abstract shouts into a conversation, then a dance, then a meditation. That said, beyond the rhythm – which Walton, whose bass is often muffled behind the other instruments, admirably pushes as well – this is a balanced effort that lacks a discernible leader. In line with the title, it seems more focused on organic, interconnected development than discrete, individual expression. At times, the music is serious. At others, around the 20-minute mark, more ludic, as Cline and Walton briefly intertwine and Sewelson ebbs in and out playfully. Even here, there is no competition for control but balanced negotiation. The more compact “The Nibbler” follows a similar trajectory and is based on a similar tender rapport rather than predetermined theme. Needless to say, such an approach takes skill, patience, listening, and practice. It does not always feel as natural as it does here. Track three, “The Way Out (Is In),” begins with an extended dialog between Sewelson and Clucas. Almost three minutes in, the band joins and falls into a walking groove that, as one might anticipate, builds once more in to a hard-blowing, discordant finale.

Had I seen the performance live, I imagine I would have been blown away. Much of that spirit and immediacy is lost on this recording. Nevertheless, it is worth remembering that this is a document of a one night of expertly practiced collective improvisation, rather than a singular epic recording. Another performance on another night would charted its own path. The unique causal chain of dependent origination (if that is a thing) would have laid different elements, both internal and external to the group, in a different configuration. This night, in other words, was worth documenting. And for those of us (reviewer absolutely included) still fascinated by unscripted, soulful free jazz bent on exploring the innumerable potentialities of unscripted moments, this release is worth the listen.
Stef on Wednesday, March 20, 2019
Share