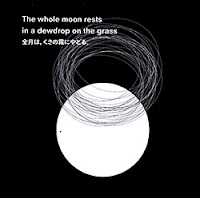 The Whole Moon Rests in a Dewdrop on the Grass presents another fantastic duo release from Eddie Prévost on his Matchless label, this time with composer, video artist, and electronics wizard Ken Ikeda performing live at London's Cafe Oto in January of last year. Prévost we all know and love from his numerous collaborations through the years and as the bedrock of the legendary group AMM. For those not already familiar with Ken Akida, he has recorded for Touch Records, composed for director David Lynch, and recorded in collaborated with David Toop, Tetuzi Akiyama, and Edward Lucas to name a few. Ikeda last recorded with Prévost in a trio with guitarist John Russell on 2016’s excellent but all-too-brief digital release In Search of Wasabi on Weekertoft Records. Here Prévost and Ikeda spin a woozy phantasmagoria of electronics and bowed metal on a single long track of cerebral and well paced free improvisation.

The piece is a decidedly subtle affair, which Prévost sets into motion with cymbal shimmer and harmonic overtones coaxed from the aether via rosined hair. Ikeda's offerings twinkle to the fore like dim stars at twilight, barely there but spectacular and essential. Ikeda often utilizes a ribbon controller, allowing him to be much more expressive than your general abstract electronics practitioner. An accomplished improviser, he also provides plenty of room for Prévost’s contributions, rather than dominating the proceedings as electronics can sometimes do. Prévost alternates irregularly between soft, slowly building resonance and sharply pulled scrapes and unsettling grima. Ikeda's electronics at times sound like the pings of some alien satellite, at moments sharp with a quick decay and just as often with the addition of delay, where Ikeda modulates the feedback in a way that recalls some of King Tubby or Scratch Perry's production sensibilities. The superposition of the duo's sound worlds is certainly compelling and works equally well when listened to actively or passively.

This is a very enjoyable release and a nice change-up to the sort of fare we free jazz heads usually revel in. I've been favoring restraint to full-on assault when it comes to music here lately, so this release was a welcome addition to my listening queue and I've found myself returning to it frequently. I'm a fan of anything Prévost is involved in, but have a particular affinity for his ability to provide contrast and dynamics on subtle pieces such as this. Likewise, Ken Ikeda’s style is very expressive throughout and he does a tremendous job of finding spaces within the sound field from which to provide subtle responses and/or warbling ambience.
Stef on Tuesday, March 19, 2019
Share