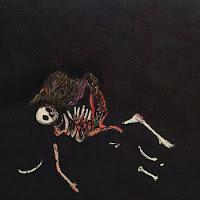 I was reading an interview with the great late Bill Dixon just recently, the one that was included in the liner notes of the Bill Dixon In Italy LP. Dixon, apart from being a very important artist, was also a great out-of-the-box thinker. In this interview he pointed out how jazz had developed from black music into a music appreciated by everyone, and that for many years now, it was not only the African-American community that was contributing to the radical evolution of what once was called “jazz”. His affiliation with European music made this easier for him to comprehend.

Listening to this CD, I find myself again looking at the past, while I listen two white guys (ok, this is the last time I will refer to any colours at all) contributing to the progress of an important free jazz tradition (now that’s what I call an antithesis…). John Stevens, when referring to the Face To Face duo he recorded with his friend, Trevor Watts, noted that they played like friends. Facing each other (thus the title), challenging in every way each other, playing at the same level, both in audio standards as well as aesthetically.

This is, or must be, the case in All Things Are Possible, a CD unfortunately of very limited edition. Andrew Barker continues to develop himself just under the radar even though he resides in the States. To my ears he is one of the most important artists in free jazz and improvisation, and for almost two decades has recorded some exceptionally good reeds-drums duos. John Dikeman has been in good form for many years now. Coming from the ritualistic tradition of my beloved Albert Ayler’s free blowing, he is a powerhouse. Saxophonists like Dikeman - here on tenor - take the risk of saturating a recording by overblowing. I take it not as an expression of ego, but more as a need to express oneself in the way this fine instrument can allow.

Barker is well equipped and experienced to overcome all this, while Dikeman, throughout this CD is very communicative. The six tracks that comprise the 38 minutes of this CD seem like a long continuous improvisation, putting together the dots of duos of the past with the present. Even though their points of reference are definitely in the past, it is very tempting to listen to their music with new ears. You can, then, discover the subtleness and ego-free approach of Barker to drumming. Or, the will of a powerful saxophonist not to blow so hard on the upper scales, but rather play the game of collective improvising. They leave no room for solos; it’s the two of them playing together all the way.

I’m always a fan of duos. They incorporate, as John Stevens remarked, a basic human stance. That of friendship, a camaraderie of some sorts, a joining of two different personalities into one combined total expression that we call music. Definitely, even today, all things are possible, so a sax-drums duo can be exhilarating, refreshing and out of the blue joyous.

The beautiful artwork of Wendy Given is an added pleasure for me.