By Nick Metzger
Percussionist extraordinaire Chris Corsano had another busy year as usual, playing traps on multiple releases in 2018, one of which made it into our album of the year poll. His is one name on a short list of musicians that I actively search out new releases from. I have yet to hear him play on a record that I didn’t like, and I’ve raved about him extensively enough in prior reviews that I’ll keep my admiration in check here. These two releases find him in good company, the first in his long running duo with saxophonist Mette Rasmussen and the second in a trio with cellist Okkyung Lee and drummer Ches Smith. 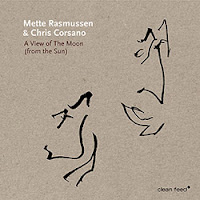 The latest from the Rasmussen/Corsano duo, dubbed A View of the Moon (From the Sun) is their first recorded as a twosome since 2015’s excellent All the Ghosts at Once. Now as then the playing is first-rate and the communication is exceptional. As you would expect the duo has really polished their language, and there are certainly some intriguing moments on this disc. You won’t find anything shockingly new here, but it’s a snapshot-in-time and a continuation of their long running collaboration. That’s a long-winded way of saying that if you enjoyed their first release you’ll most certainly enjoy this one. The album begins with “Many People Were Scandalized – Some Still Are”, where the first half or so is defined by some very inventive, lyrical saxophone from Rasmussen supported with exceedingly busy, colorful percussion from Corsano. The second half is more probing but still lively, presenting some spectacularly subtle clatter from the drums, over which the saxophone spins ideas and multiplicity, ending on a breathy note. The next piece “Folding in on itself” starts with bluesy saxophone licks over fairly subdued percussion that builds in intensity over several minutes and then goes quiet, leaving Rasmussen room for tangled solo runs and pungent honking before reappearing and capping off the piece in a churning interchange.

The following track, “Let's Have a Rain Check on the Franchise”, is a more sparse and probing improvisation. Rasmussen utilizes flutter tonguing through the first have before going in a more percussive, staccato direction which she breaks up with lamented phrases and gentle growl. Corsano is a distant storm of percussion, all snare roll and cymbal chatter with highlights of bell-like ride. “Today's White Blood Cell” is another understated piece of restrained saxophone over a drone of bowed cymbal. It’s not so much about building dynamics as maintaining stasis. “Well Now, There, Then” is full of soulful saxophone passages interspersed with resonant long tones, quick runs, and reed squeals. Corsano provides a varied percussive foil for Rasmussen’s creativity, again coaxing the best from his collaborator with his impressionable playing. “You're Breaking Up, the House is Going through a Tunnel” involves more muted flutter tonguing and multiphonics from the saxophone, accented with lightly bowed cymbal and snare rolls. Passages of rhythmic reed popping are offered over light percussive accents before a build-up in intensity towards the end of the piece. “A Detail” is an interesting texture based invention, Rasmussen this time utilizing preparations to induce some interesting vibrations in her instrument. Corsano adds a bit of slide clarinet (an interesting homemade-looking instrument that he plays from time to time) to the mix which adds some color to the limited sax/drums palette. The album closes with “Another Detail” which is probably the most sonically varied track on the album. From softly played exchanges to full on skronk, it covers the highs and lows of the duo's dynamics along with a bit of everything in between. 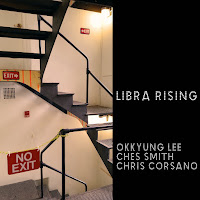 Libra Rising captures a performance at New York’s The Stone (presumably at the New School location) in October of 2018, finding the trio of Corsano, drummer Ches Smith, and cellist/composer Okkyung Lee engaged in a busy and colorful free improvisation pitting intensity vs. moderation. The piece starts off busily and builds from there, the stirring percussion being counterbalanced by Lee’s growling, screeching cello, each building off the other until around the six minute mark where things slow down and become more textural and introspective. This precedes a build-up in intensity that increases linearly from seven to around nine minutes, at which point the trio is almost back up to their full gait. Lee’s elegant glissandos are supported by the shaky junkyard/found-object percussion, which deflates into near silence with Lee lightly bowing along with an almost transparent snare roll. The cello/percussion combination takes on the timbre of a burning balloon factory shortly thereafter, building into a rumble of friction squeaks and crackling rhythm before the spectral pendulum once more signals a return to quiescence. Amid the persistent but sparse percussion, Lee plays her cello as a metamorph, wringing a variety of sounds and musical shapes from the instrument and leading the two percussionists into a final crescendo, reaching a roiling apogee before falling back to rest again.
I’ll admit that when I saw two drummers I was expecting a bit more explosiveness from their end, but neither Corsano nor Smith is keen to dominate the proceedings and instead they provide a platform for Lee’s cello to dance. The improvisation is very well recorded and exhibits the excellent communication and character that master improvisers exude. The playing is confident and sharp, and there are several moments where they teeter on the edge of a full-on blowout, yet every trip to the threshold results in a return to orbit which I quite like. Not every improvisation needs to shred the skin from your face. And although we know this cat has claws, in this instance it’s happy to sit on your lap and purr.
Listen and download from Bandcamp.