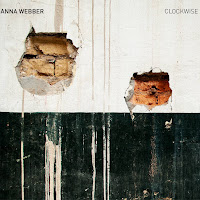 This was a pleasant surprise for me. I had read about Anna Webber, the saxophonist and composer, before, but I had not yet listened to her music. Clearly, I have been missing out.

This album consists of Anna Webber on tenor saxophone and various flutes, Jeremy Viner on tenor saxophone and clarinet, Jacob Garchik on trombone, Christopher Hoffman on cello, Chris Tordini on bass, Ches Smith on drums, vibes, and timpani, and Matt Mitchell on piano. The band functions impressively as a unit. Still, this album is Webber’s lead, and she shines through her instrumental virtuosity and her impressive creativity over a range of pieces.

Her compositions are stilted. Some, such as “Kore II,” sound like less bop- and more march-oriented Eric Dolphy. Still others, such as “Idiom II” and “King of Denmark I/Loper”, are reminiscent of contemporary Dave Holland compositions, even if they are more willing to explore asymmetry. “Clockwise,” the title track, is more reserved but no less exploratory, coupling a slow, lumbering bass, murmuring clarinet, and whispering flute with cascading piano runs and a well-placed percussive burst of activity to an altogether entrancing effect. “Array” seems based around an angular, deconstructed funk beat and repeatedly referenced but never fully articulated melody. “Hologram Best” is a short meditation on a frenetic but catchy theme, that stands in contrast to the layered bass rumblings of “King of Denmark III” which follows (and, which, itself, contrasts starkly to the jaunty “King of Denmark I/Loper” and the disorienting battlefield, lull-before-the-storm soundscape of “King of Denmark II.”) “Kore I” concludes the album and is rooted in a series of steady bass plucks that are similar in concept to those that drive “Kore II” but create a strikingly different effect, particularly when coupled with the brief melodic interludes practiced between Mitchell’s piano and Smith’s percussion.

The tracks on here vary in mood, tempo, and feel, but nevertheless cohere in their shared zeal for off-kilter exploration. Some pieces are playful; others, more somber and contemplative; others, restive and sinister. This album, in other words, runs a gamut of forms in a manner that compounds into a surprisingly impactful whole. I know we are just finally getting to 2019 releases. Nevertheless, this is one of the best I have heard so far.