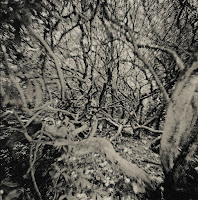 Truth be told, I think I'm getting addicted to this wonderful album. And it is even more amazing because it's performed by two musicians whom I'd never heard of before. Pak Yan Lau is 'part of the Brussels underground crowd' and Lionel Malric is a French keyboardist 'working in many contemporary rock, fusion and folk genres'.

The two pianists met in June 2014, without any plans or specific goals other than to create music together. They put the two pianos (one 1/2 queue Erard 121 from 1903, and one from 1908), face to face, put some mikes in the right places, made the necessary preparations on the strings, and then this fabulous album ended up as the result. I guess the two of them realised that they had something of true musical value.

Their approach is totally open, yet extremely tight in terms of interaction. Sometimes AMM comes to mind when the sound is minimalist, sometimes Eve Risser when it turns hypnotic, but these are just references for a music that defies semantics and categories. Both pianists are great sonic sculptors, producing strange and intense and dramatic sounds on the first track, menacing scrapings on the thirty-second long second track, both acting as a suite-like introduction to the long "Mount Tune", which creates an intense but subdued rhythm with chime-like sounds and sparse keyboard notes that gradually evolve into a rich, dense and dark mystery, full of deep rumblings, industrial pounding, dramatic emphasis and maddening repetitiveness on one single high-pitched tone. The next track, "Lhotse, Nuptse ou Lhaotse" is slow and enigmatic, with almost flutelike sounds shimmering over a light and sparkling background.

The B-side starts with the dark "Angel's Hair To Pull", with muted notes played over a non-descript eery groundtone, evolving suite-like into the clarity of the next track - "Shredded Tears Make Misty Clouds" - which is built around two single notes functioning like chords, and which invite other sounds to accompany them, gradually expanding into a tapestry of intense harmonic beauty. The album ends with the mysterious "Le Baleines Du Negoyou", again a piece full of question marks but with a resonating beauty that is equalled or created by its strangeness.

The amazing thing about the performance is its inherent lyricism and harmonic beauty, even if most of the times it's even hard to grasp that the sounds are produced by pianos, and then by how many. Despite its exploratory nature, the music's emotional power is direct and intense. It's a wonderful illustration of visionary music that leaves all concepts behind to go to a new place, as yet unheard. And that place is incredibly fascinating and attractive.