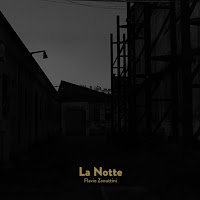 The Italian trumpeter Flavio Zanuttini started his career in big bands or smaller ensembles with quite an eclectic repertoire, ranging from blues, rock to bop and beyond, in bands with names such as the North East Ska Jazz Orchestra, the Abbey Town Jazz Orchestra or Arbe Garbe with Eugene Chadbourne. Bands that bring fun and entertainment, and their reach is possibly relatively local in Italy.

But next to these albums, Flavio Zanuttini is now carving out his own space in avant-garde jazz and improvisation, with amongst other tributes to Don Cherry and to Monk, and more recently in a few albums released on Clean Feed, which are still more accessible than this album, his first solo release. The sonic universe we get here is closer to the excellent album with Axel Dörner, Torben Snekkestad and Florian Walter, called "Bruit 4", also released on Umland.

In approximately thirty minutes Zanuttini brings us nine improvised pieces, all developed on specific techniques, yet luckily going beyond the mere exhibition of skills. The polyphonics, the eery tones, the whispers, the gliding tones, the screams and intense pressurising, the circular breathing (on "Scelsi"!) are more than just that.

The album is called "La Notte", the night, as the art work illustrates, and the music brings us to that space where clarity and vision disappear and only sound is still available to guide us, yet these sounds are perplexing: moaning, frightening, disconcerting, exciting ... suggesting a world that is beyond our grasp yet is also obviously present, and - as in "Cantabile" - the enigmatic opacity of the night is suddenly lightened by the classical tones that shine through this darkness like a window, adding something human, and familiar.

You can listen to experimental techniques like a guest in a circus: you watch and you are amazed at the skills you see, but nothing more than that. It becomes art when the same techniques are presented in such a way that they change the way you listen and captivate you emotionally and esthetically, revealing something deeper and more valuable. It's hard to turn technical skills into something meaningful. And Zanuttini does just that. I really can't wait to hear more from him.