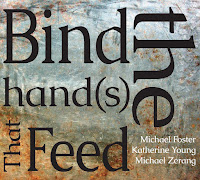 Some of my all-time favorite music has been the result artists who, dissatisfied with the limitations of their instruments, adapt the functionality by means of preparations or through extended techniques in order to create new sounds not linked with the instrument. There is a long lineage of artists who have done this and the fantastic Relative Pitch release “Bind the Hand(s) That Feed,” presents us with an exciting trio of such musicians, each of whom is known for pushing their respective vehicles beyond standard techniques and sounds and into more exciting and experimental directions. The ferociously productive saxophonist Michael Foster has created an entire vocabulary from extended technique, preparations, and amplification to delivered some of the freshest ideas in free improvisation, noise, or otherwise over the past several years. Similarly, composer and bassoonist Katherine Young pushes her instrument well past its typical orchestral role into studies of timbre and dynamics. Her use of subtle electronic effects on this record and elsewhere transforms the bassoon into something else entirely, almost like a living, breathing entity. Drummer Michael Zerang likely requires no introduction for our readers. The hyper-innovative percussionist and composer has been at this since the mid-1970’s and is himself a living legend in free music circles, having played and collaborated with the veritable who's-who of the global improvisation community. It goes without saying that you can expect this trio has served up something very special here, forgoing any expectations of what a woodwinds/percussion trio should sound like and delivering instead an exciting and unique set of improvisations that absolutely demands repeated listening to fully absorb. With a bit of contemplation, the album title makes perfect sense.

The six tracks are simply titled “A” through “F”, which I like because titles for verbally inexpressible music like this would be facetious. “A” is the longest track at almost 12 minutes, and it is apparent right from the start that the listener is in for an interesting ride. It begins unobtrusively enough, but this lasts a very short time before the action ramps up significantly. The palette of sounds utilized here (and throughout the album) is fantastically unusual and grotesque. Foster’s frenetic gurgling, popping, fluttering, vocalizing maelstrom is complemented nicely by his cohorts, with Zerang wringing all sorts of rubbed/scraped grima from his traps, along with more subtle chime and bell-like sounds. Young’s bassoon sound is so far from what you’d expect from the instrument that it’s difficult to place her at times. I hear distorted guitar, groaning, percussive bass drum thumping, termite colonies eating away at a rotting stump in the middle of a jungle, and the deep resonant growl of the Leviathan sounding from the abyss. For “B” Foster and Young play burbling, grunting, flatulent, slurping sounds over Zerang’s impenetrable howl of scrape and hiss. Young adds a bit of unprocessed fluttering bassoon drone towards the end that comes on like an icy breeze over molten rock. “C” sounds of squeaking cork and woodpecker drumming, of cicada calls and dog whimpers. The vocalizations used throughout by the woodwind players recalls trombonist Paul Rutherford’s pioneering solo works. A brief aside as I’m listening: they couldn’t have found a drummer more perfect for this type of record than Zerang; his playing here is spot-on perfect and elevates the playing of his partners. “D” is the shortest track at a bit less than 3 minutes, but it may also be the most intense and wet (you’ll see what I mean) sounding track on the album. On “E” the force of the sound has abated and the improvisation is more subtle and stretched out. A much needed grounding that, intentional or not, yields something slightly warm and expansive for the listener in the midst of what feels at times like utter madness. The closing piece “F” begins pretty quietly, and in contrast to the rest of the record it features a handful of recognizable timbres. You know it’s going to get weird at some point and indeed it does, as over the last several minutes we are treated to some roiling sax squelch and high octane percussion hovering over Young’s bassoon drone, which refuses to play nice and wants to sound like a synthesizer, which as it turns out is the perfect thing for it to sound like.

I think it’s worth stressing that extended techniques/preparations aren’t used here as highlights, as punctuation, or to add color. They are the name of the game. It’s almost like listening to an alien species, and the deeper you listen, the more you are rewarded. There is an uncommon depth to the music, mainly due to the proficiency of the artists at improvising with these sorts of sounds. It doesn’t seem as if there’s any real-time experimentation going on, at least none that I can discern (the phrase ‘I meant to do that’ keeps coming to mind). The musicians have such fluency in this style of improvisation that the resulting album borders on some sort of magic. What at first seems like chaotic, punitive noise transforms itself into something sublime with a bit of concentration, comparable to a sonic autostereogram. No doubt about it, this will be a difficult record for some, but it’s also a very special one. On first listen you may think I’ve lost it, but keep listening, I’m confident that you’ll see what I mean.

If you're interested, the album's launch concert will take place at the Elastic Arts in Chicago on March 14th.