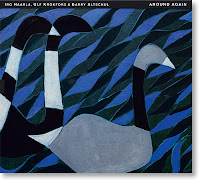 Iro Haarla’s Around Again is the second Nordic tribute to influential and prolific American pianist-composer Carla Bley, released in recent years and follows the reeds-piano duo of Fredrik Ljungkvist and Mattias Risberg (And Now The Queen, Lilao, 2016). Haarla, a composer and bandleader in her own right, known for her role as arranger and co-composer of seminal Finnish drummer Edward Vesala work (her late husband), suggests fresh interpretations of Bley’s early compositions, some were covered by the duo of Ljungkvist and Risberg.

Most of Bley’s compositions covered by Haarla’s Around Again were featured on Paul Bley Trio iconic album, Closer (ESP Disk, 1965), described by Haarla as “one of the most important recordings of all time” and Bley as her “favorite pianist”. But Haarla has no intentions to adopt the interpretive perspective of Paul Bley, one of the first musicians to play Carla Bley’s compositions (and her first husband). She comments that Closer and Paul Bley solo piano album Open, To Love (ECM, 1973) made a lasting impression on her as a young student. Haarla enlisted to the recording of The Music of Carla Bley veteran drummer Barry Altschul, who has played in Bley’s Closer and on many other albums of the Paul Bley, in addition to her close partner, double bass player Ulf Krokfors, who initiated this project.

Haarla sheds a new light on some of the most enduring compositions of Carla Bley, somehow more introspective, delicate and thoughtful than the powerful, ubeat and often whimsy, early perspective of Paul Bley. Haarla’s new interpretations sketch Carla Bley, as Haarla herself, as an independent and strong-minded composer that refuses to employ conventional compositional strategies or to subscribe to common genre conventions, a rare phenomena “in the macho world of American jazz”, as Haarla adds. These compositions, recorded in Helsinki in November 2015, were written on just one page of notes or even less, and represents different aspects of Bley’s one-of-her-kind personality - humorous and ironic, restless but playful, dreamy yet determined, open to improvisation and inviting totally different musical personalities. Haarla succeeds to distil the elusive, poetic, haiku-like essence of each of the 12 compositions of Bley, even though she has often chosen a traditional narratives of head-solos-head. She plays with great sensitivity and manages to sound emotional and cerebral at the same time, as she makes these compositions her own but still meditates on their mysteries simultaneously.

Haarla’s Around Again offers a sparse version of “Closer”; contemplative but engaging cover of “Vashkar”; charges the iconic “Ida Lupino” with a strong and transparent, lyrical vein, turns “Olhos De Gato” into a schizophrenic waltz filled with nervous steroids, enjoys an open, playful interplay on “King Korn” and plays “Utviklingssang” as a folk song. “Jesus Maria” that closes this album, one of the earliest compositions of Bley, is performed with reverent, spiritual mode. All these compositions are performed with profound melodic flow and with open senses of time and space. Altschul blends organically into the intimate, conversational and patient interplay of Haarla and Krokfors. His subtle playing always highlight surprising melodic games deep inside Bley’s compositions, as his imaginative solos introduction on ““Olhos De Gato” and “And Now, The Queen”.

The Music of Carla Bley is released with a beautiful art work of Finnish painter Ole Kandelin, insightful liner notes of Haarla, Krokfors and Altschul, an essay on the music of Carla Bley by Amy C. Beal, author of Carla Bley (University of Illinois Press, 2011) and the recorded history of each of Bley’s compositions.

You need such a beautiful gem at your home.