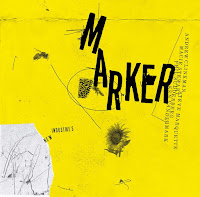 There’s no secret that I really like Marker. I think quotes from my reviews of their first two releases is a good way to set the stage, and to also reveal my general preferences in music, regardless of genre.

“I guess I just love when a simple theme explodes in front of me.” (From review of Roadwork 1/ Roadwork 2/ Homework 2)

“… and secondly is followed by the experience of disaster, of walls tumbling down, of bridges burning of chaos and mayhem, is something I happen to like.” (From review of Wired for sound)

That’s how I start listening to this album. With the curiosity of what Vandermark is up to this time (first album), and with what Marker is really doing with the bag of tools they have built for themselves so far (second triple live album). Of how improvisation within, and certainly outside of, given themes, and even the use of themes as building blocks that are not locked in place in a composition but that can be moved around while investigating how to look at them from different angles using freedom of improvisation to propel the group between said building blocks. This might be especially helpful in a live setting where the group is repeating known parts, and at the same time encouraging each other to do just that – explore how to move around and to ‘be free’ (cliché warning). I’m excited to hear how Marker will take these experiences and discoveries with this new release; which happens to have both studio material, and live versions of new compositions. I would like to refrain from asking myself if they can possibly pull off the same stunt again, but maybe it’s good to give myself a bit of fanboy vaccine before embarking on another Marker listening journey.

It takes attentive detective work to listen to Marker. As said, on this packed double album we get 2 hours and 12 minutes newly composed material with the first disc being studio material recorded on July 15, 2018 and the second disc has live cuts recorded on July 12, 2018. The notes from Markers' Bandcamp page captures one way the listener can experience the new release:

I’m asking myself what I’m thinking of this somewhat academic way of listening to music; that is if one tries to “hear the compositional strategies”. One answer can be that this is just one way of listening to Marker. For me it’s more about being surprised, going back and forth between versions, experiencing a snapshot from the summer of 2018. Marker was on tour and prepared for recording. For me it has been so interesting to first hear the live performances, and then hearing how they chose to record it in studio; of course, juggling around the blocks of composed music.

Now, going a bit deeper into what we’re hearing on this album.

Ray Manzarek. The studio version of L’Argent/Roulette oozes of the late Doors pianist/organist Manzarek funky doom and gloom notes. It’s a 'Riders on the Storm' moment, but with a bit more attitude. Similar to 'Run' on the Johan Lindström Septett's release Music For Empty Halls. But going to the live cut of the same theme presents something completely different. With a more swift tempo Sudderberg's drums goes from funky and cool to a light breeze of swing. It carries the Marker watermark of having a tombola of notes going in circles, round and round – but knowing that the song extends the fifteen-minute mark, it’s just a matter of minutes until things change. Sure enough, it never gets boring. An abrupt stop, then distorted guitars cuts the sky in half. It reminds me of Kiko Dinucci playing on Paul Nilssen-Love’s new album ‘New Japanese Noise’ – and it makes me so happy! I was really hoping to hear Marker incorporating something bold and aggressive, since they have 2 guitars at their disposal, and even though it’s not complete mayhem, it is disruptive and just what Marker should be doing to move forward: keep bringing new ideas, or bricks if you will, and to add more ‘compositional strategies’ to their ideas of how to look at composed vs improvised material.

On this album Stewart also plays the violin which goes hand-in-hand with electric guitars. On Porto/Two or Three/Baal (Live) Stewart, Marquette and Clinkman demonstrates how elegant this becomes when it moves “in front” of Sudderberg's beat. It is an interesting experience to hear Marquette hard-panned to the left channel while Stewart is heard across the soundstage, and Clinkman in the right – first more subtle, but then more clear. I know, this becomes a technical block of this review, but it makes a lot of sense from an experimental perspective. Yes, the music is very enjoyable, but it is also very rewarding to hear how Marker has clearly spent a lot of time making sure it is being presented in a certain way. Pay attention to when Vandermark joins in at 2:15-2:16. Suddenly the entire song comes together. Layer upon layer.

On La Chambre #1/La Chamber #2/Pickpocket #1/Two or Three, Marker uses their composed blocks to balance emotions against one another. A somewhat searching gaze into something far away is met with a bebop beat followed by a cool (did someone say hot?) Vandermark solo. And on the closing live track Alphaville #2/Trance/Pickpocket #1/Alphaville #1 (Live), a sleeping beast comes to life as Marker pull together up, up, up and then erupts! Then the trademark Marker thumping beat to Vandermark’s horn, followed by delicate questions from Stewart as the rest of the band prepares for another wave. Slightly shy of 10 minutes the mood changes to close off the album as this train arrives to its final stop. I’m done. That’s it. Thanks Marker, you’ve just delivered a classic.

Marker is touring Europe and will be performing a two night residency with a host of special guests in Berlin on March 18th and 19th at ACUD MACHT NEU. For more information, please see here.