Four new releases from Israeli expats, all recorded outside of Israel and far away from the tiny and too familiar local scene of free music, All new releases - of drummer Ehran Elisha, guitarist Eyal Maoz and drummer Asaf Sirkis, viola player-vocalist Maya Felixbrodt and bass clarinet player Ziv Taubenfeld and double-bass player-vocalist Shaya Feldman - offers its own distinct, experimental and risk-taking perspective of free and improvised music. 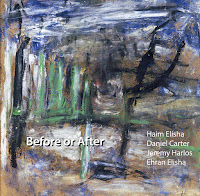 Before or After brings together an ad-hoc quartet of New York-based improvising musicians from different aesthetics and artistic convictions -  father and son, classically-trained, composer-conductor-painter pianist Haim Elisha, who also painted the cover, and free-jazz drummer-educator Ehran Elisha, a disciple of legendary drummers Max Roach, Ed Blackwell and  Milford Graves, who initiated this quartet; a frequent collaborator of Ehran Elisha, reeds and trumpet player Daniel Carter, who has played before with Elisha in a trio with bass players Drew Gress and Wilbur Morris, and known for legendary Downtown ensembles Other Dimensions in Music and Test outfits; and bass player Jeremy Harlos, known from trumpeter Arthur Brooks's Ensemble V and and ensembles with guitarist Alec Julien.

The quartet recorded a one-off studio free-improv session in March 2014 in Brooklyn.  Before or After uses key improvised gestures as its main compositional elements. Haim Elisha sets the lyrical, melancholic atmosphere of this session. Ehran Elisha colors his ideas and Harlos solidifies the open pulse, but it is Carter who charges this session with rare poetic beauty. His concise interventions are delivered with a great sense of timing and idiosyncratic, singing phrasing - on the flute and trumpet - and channel and focus the open-form, title-piece  into deeper , emotional statements. Carter moves to the center and takes the lead on the three-parts, free jazz suite “Atlantis”, and his articulate, gentle sax solos discipline the restless drumming of Ehran Elisha and the contemplative flights of Haim Elisha. His beautiful comments on Harlos arco solos on the lyrical “Vermont: Winter” are the highlight of this short piece. The quartet reaches a balanced interplay on the last “After of Before” where, again, Carter steers the free-improvised, muscular commotion into a peaceful, emotional one, with brief, yet clear and warm trumpet solos. 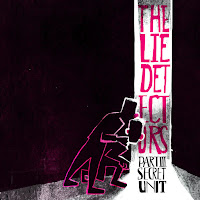 The Lie Detectors is the duo of New York-based guitarist Eyal Maoz, known for his new Jewish music outfits Edom and Abraxas and from his early collaboration with trumpeter Avishai Cohen in the Lemon Juice Quartet, and London-based drummers Asaf Sirkis, leader of the IQ quartet with Polish vocalist Sylwia Bialas and his own trio. Maoz and Sirkis are close friends and have been playing together since growing up together in the town of Rehovot, south of Tel Aviv. Their new incarnation as the top secret unit, The Lie Detectors mocks the Israeli ultra-militarist discourse, but their unit already released two albums before, the debut Freedom Has Its Own Taste (Self Produced, 1998) and the follow-up Elementary Dialogues (Ayler, 2006).

Part III: Secret Unit was recorded at Cowshed Studios, London, in unspecified date, and highlights the telepathic connection between Maoz and Sirkis. Maoz, who composed all the pieces except one by Sirkis, enjoys the freedom of any binding genre conventions and let his imagination run wild without telling where he will go next time, trusting the deep, immediate interplay with Sirkis. The Lie Detectors jumps from the explosive metal attack of “Rice” to the folky “Closer”, back to the muscular, math-rock of “Here and There” and to the acrobatic fusion of “Flying Horse” and “Zoo”, experiments punkish interplay on “Green Shirt” and don’t shy of being emotionally naked on Sirkis’ “Trees” and Maoz’ “Quiet ME”. This secret unit reminds us that Maoz is still criminally unappreciated guitar hero and how potent drummer Sirkis is. 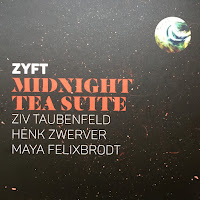 Zyft is an Arabic word for bad or poor quality, often used also in Hebrew and Yiddish slang. Zyft is also the Amsterdam-based, free-improv, chamber trio of veteran Dutch guitarist Henk Zwerver, bass clarinet player Ziv Taubenfeld, known from the Bones trio, who has played on previous albums of the Zwerv outfit led by Zwerver, and viola player Maya Felixbrodt, who also plays in the art-rock trio Sex Baby Kitten. Midnight Tea Suite is the debut album from the trio, which has been working for four years already, recorded in Amsterdam in May 2018.

There is nothing bad or poor in the six improvisations of Zyft, just eccentric and adventurous sense of breaking rules and taking risk. The free-associative interplay of Zyft investigates briefly ideas, timbres and sudden and nervous dynamics but most of the time with no attempt to focus or attach itself to any of it. Zwerver explores abstract ideas and exotic Eastern sonorities with fractured guitar lines. Taubenfeld takes the role of the responsible adult and goes deep down into more jazz-ier and coherent realms with the bass clarinet, especially on “And The Curtain Opens”. Felixbrodt is the wild card of this trio. She plays with total abandon and arresting senses of imagination and humor, pushing constantly to wilder and more volatile terrains. Just check her tour-de-force solo on “Sip, Sip, Sip” to understand her uncompromising power. 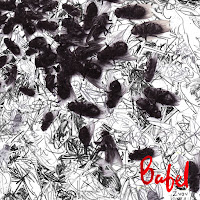 Zvov (fly in Hebrew) is the dadaist-cabaret trio of Netherland-based, Spanish cellist-vocalist Clara Riviere and double bass player-vocalist Shaya Feldman and viola player-vocalist Felixbrodt. This classical string trio gone awkwards declares that “in a world based on logical separations and putting people in boxes, we say: No More! No more order, this leads nowhere! We want chaos!” and promises that its debut EP, Babel, is “shelter of nonsense”.

But the whimsy-clumsy-theatrical spirit of Zvov has much more to offer than pure nonsense and provocative dadaist gibberish. The interpretations of the Israeli poems - Yona Wallach’s “Yonatan” and Hezi Leskli’s “Paris”, as well as the mournful “The state of the injured”, reflect a growing revulsion from the Israeli hyper-militant reality of occupation, bloodshed and futile wars. “Oktava” and “ Leßbitim”, on the other hand, offer an amused look on the uniformed, dead-serious and dignified world of classical music and the psychedelic “Asçarê” mocks titles and phrases from Japanese movies, including their over-dramatic soundtracks.

The physical release of Babel comes in a large match box with a USB flash drive with all the music and booklet with unique graphic designs made specially for each song.