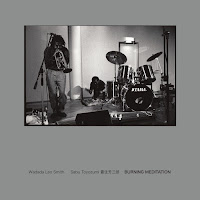 In 1992, Wadada Leo Smith and Sabu Toyozumi released "Cosmos Has Spirit" on the unknown and small Japanese Scissors label. Fans will absolutely love this album too, a concert recorded live on March 22, 1994 in Japan.

Toyozumi's Japanese output has been brought back under the attention in the last year by NoBusiness Records and by Chap Chap Records, releasing other performances dating from the 90s. We can only applaud both labels for doing so.

The American trumpeter has recorded with frequent intervals in a duo format with a drummer. Like on "Kulture Jazz" or "Compassion" with Adam Rudolph, or "The Blue Mountain's Sun Drummer" with Ed Blackwell , "Wisdom In Time" with Günter Baby Sommer, "America" with Jack DeJohnette, or "Ancestors" with Louis Moholo-Moholo, Smith's playing holds the middle between deep blues and spiritual meditation. Even if all these albums are really different in nature, they come highly recommended. In the last years Smith has sharpened his compositional skills and released albums with more serious weight and ambition, some of which are truly excellent, on other ones overplaying his hand a little, but that's how it should be. You don't get anywhere without taking risks and moving boundaries.

This performance of twenty-five years ago brings the direct artistic authenticity of his other duo albums, with long clear-toned trumpet improvisations, alternated with bluesy singing and playing of the bamboo flute or koto, the Japanese string instrument, or also kalimba and harmonica. Toyozumi is a perfect companion for Smith on this journey, hitting hard when needed, uninhibited, but equally modest enough to leave the stage to Smith on the quieter pieces.

The quality of the recording is excellent, with both instruments receiving the right balance and power: it's almost as if they're performing right next to you.

Even if some pieces get attribution of composition to either Smith or Toyozumi, it is clear that most are completely improvised. Fans of Smith will recognise the the jubilant tones of "Uprising", known from the last track on "Kulture Jazz" or the first track on "The Blue Mountain's Sun Drummer".

Through their music, both musicians explore the joy and sorrow of life, of what it means to be human, trying to transcend our fate by connecting to something grander and more simple. As mentioned in earlier reviews: music with deep roots and branches that reach to the sky.

It's another great addition to Smith's already rich and diverse catalogue. We can also thank the label for its effort to release it on both CD and vinyl, with the fromer being obviously longer with additional tracks, and in a different order.

Fans of Wadada Leo Smith or Sabu Toyozumi should not miss this!