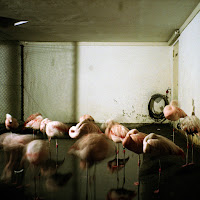 We all come into new musical experiences with our own mental databases populated with what we know (or think we know), based on what we've previously heard. As music writers, we utilize our own familiarities and appeal to those of the reader, trying to find some common datum from which to launch our descriptions and sentiments. Listening to this record made my mind race trying to find some psychological mooring to tie off to. It's not unique in this regard, but it does seem to be a rarer occurrence in these days of capitalism-driven homogeneity. Berlin-based composer Michael Hoppe's solo debut, the terrifically titled Put a Filter to Your Ear and Just Smile Through It was made over the course of three years and features no fewer than 50 musicians and colleagues, both professional and amateur, across its 9 tracks. Hoppe then inventively arranged these disparate sources into something morbid, pressing, and animate. Knowing this, you can imagine that it makes for a compelling and wide-ranging listen. The legendary French group ZNR comes to mind, however this is more in-line with Igor Wakhevitch's eclectic masterpiece “Docteur Faust” with a free jazz chip on its shoulder. But where those albums could be thoughtfully considered quasi ‘variety shows’ for the respective artists’ assorted ideas and influences, this record comes off as more cohesive to these ears. To put it another way, rather than a tray of hors d'oeuvres neatly arranged in discrete rows to compliment and contrast each other, Michael Hoppe has taken his ideas and influences through the sausage grinder, giving us a steaming helping of the best of his wurst (I cringed as I wrote that, but fuck it, I'm leaving it in).

The album is a murky undertaking, but not in a sense of muddied production. The mixing and mastering are extremely good and all of the elements are easily discernable, if not necessarily easily identified. The murk I’m referring to is a persistent gloom underlying the album. It carries a bleak tone that I’d attach to existential dread, perhaps topped off with a bit of the theatre of the absurd. The promotional materials seem to indicate this as well; there are no platitudes contained within, only a defiant smirk. The range of sounds utilized on this record is vast. There’s plenty of your typical horn fare scattered about, as well as piano, vibes, flute, guitar, etc. The expressive free jazz drumming is really the glue that holds this brute together, but what makes the biggest impression are the electronic effects. The synths are menacing throughout, sounding at times like wind ripping through the dead branches of some ancient Bavarian forest. There is almost no attack to be heard from the electric bass and this elevates it to a physical presence, rather than a mere rhythm instrument. There are a few brief interludes between the longer pieces, but even these don’t offer much respite, only more grotesque experimentation. Then there are the vocals/voices. Some menacingly Attila-Csihar-like as on “Tastes Better Than I Expected”, others shouted and angry, exemplified by the track “Step Aside, Please.” Of all the pieces in the collection, “Have You Ever Heard of Indonesia” best sums up the aesthetic, if you can call it that. The menacing arco contrabass sets up a heavy, heady delirium that features the best orchestration on the record in my opinion.

Put a Filter to Your Ears and Just Smile Through It is an extraordinary record that has stood out to me for several reasons that are obvious once you’ve given it a spin. However, getting back to the sausage metaphor the record could’ve used a few more shades of black, namely in pacing and dynamics. But that’s just my taste and it may not be a concern for others. In the album’s promotional material Hoppe rightly notes that if you search his name on the internet you’re more likely to find info on the Grammy-nominated new age pianist than our hero. And I can’t help but snigger thinking that some poor enthusiast from the Age of Aquarius might unwittingly stumble upon this incubus. For some free jazz connoisseurs albums like this will never be taken seriously, mainly because it doesn't take itself too seriously. This is a pity; as listeners of the avant-garde I think it's imperative to maintain an open mind. So, even if my tired descriptors haven't sold you on it, I'd recommend you have a listen anyway if/when you're feeling adventurous. You can preview the album in its entirety via Bandcamp. Music will continue to evolve regardless of our wants or needs, just as it always has. As Seneca the Younger put it (though in a different context), “Ducunt volentem fata, nolentem trahunt.”