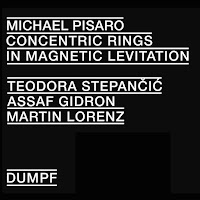 Michael Pisaro, one of the most well-regarded members of the Wandelweiser collective, composed this piece for “three musicians playing live and pre-recorded piano, percussion, sine waves, tape machines, various objects and found sounds, and comprised of fourteen interdependently moving layers of musical material.” Stepping up to the challenge on this recording are Teodora Stepančić (piano and objects), Assaf Gidron (electronics and objects), and Martin Lorenz (percussion).

The piece begins with a resonant ring, then hiss peppered with isolated piano strokes. The ring builds into a mass of sine tones. The hiss slowly gives way to a softer, humming motor, which at times sounds grinding and at others sounds like a recording of a steady wind or ocean. The piano grows louder, but hardly more active. Gongs periodically interrupt the odd harmonies.

According to Pisaro, this piece imagines rings that float around each other, interact, and diverge. It is, in a sense, a slow, emerging dance of sounds, switching partners, intertwining, and breaking prescribed formations. There is wandering, but also a concerted directionality. It does not sound as if the music is merely floating in a body of water but going somewhere.

The notes are crisp but, eddied by background static, the mood is dark and hazy. Ocean, wind, water and motor sounds dip in and out of perception and, more so than the more discernable piano and sine waves, drag this piece through an eerie abyss.

About two-thirds of the way through, the track picks up. By this, I do not mean the tempo increases, but that the spaciousness gives way to a more condensed soundscape. Instead, the piano turns to heavier and deeper tones, at times melting into other droning timbres. There is a measured crescendo in activity. The ocean imagery becomes more apparent as water and bubbling sounds appear and disappear, mimicking the gentle undulations of an open sea. Faint, muted voices emerge indicating that land, or at least some means of contact, is nearby, even if still invisible. In its motion and emotive development, this piece is cinematic. It is quiet but on a grand scale. It shares a density and fragility with Deep Listening, though it explores that school’s darker potentialities. It shares the plodding, foreboding aesthetics of more contemplative doom metal, but substitutes more delicate sinewaves, computer effects, piano, and objects for the guitar and dense feedback. Especially in the last fifteen minutes of “Concentric Rings,” there are moments in which one expects to hear shrieks or howls in the background, or maybe distant horns a la Stuart Dempster and Cuong Vu on Sunn O)))’s Monoliths and Dimensions (sans the heavy drone metal elements). The tension is broken five minutes later by the dim flickering of distorted voices that, with a denser combination of sinewaves, feedback, hissing, and piano, draw the track to its conclusion.

This album is much darker than I had anticipated. Does it speak of joining or separating? Bonds, or their ultimate and necessary dissolution? Does it reflect solitude or loneliness? Or, claustrophobia? As with much of Pisaro’s work, this piece is an enigma. As with much of Pisaro’s work, it is also precise and utterly beautiful. Cheers to Stepančić, Gidron, and Lorenz for this masterful and deeply moving realization.