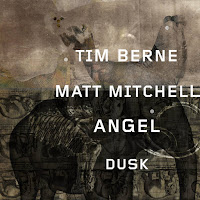 Tim Berne (saxophone) and Matt Mitchell (piano) are two stalwarts of the New York scene who have collaborated for nearly a decade in Tim Berne’s Snakeoil. Although Mitchell has recorded a solo album of Berne compositions (FJB review here), this is their first proper recording as a duo. And, it is an impressive one.  Most notable about this CD is the lack of a leader.  Berne and Mitchell approach these compositions as equals. (No writing credits are given, further indicating a deeply collaborative and balanced effort.) There are a few stand-out tracks, as all follow similar themes of shared lead, catchy and deconstructed melodies, homophony, blurred consonance and dissonance, and modulating scales that evoke Coleman’s harmolodics. This speaks to the power of each piece and the cohesiveness of the album as a whole, rather than any sort of stale repetition. Tracks tend to be short for the genre, making them pithy, pointed, and effective explorations of harmonic communication. If you are already a Berne or Mitchell fan, you probably already know the technical and emotive qualities to expect. If you are not familiar with the duo, this intimate recording is a great introduction to two accomplished and forward-thinking musicians, deeply rooted in the free jazz tradition yet still fresh and inspired.

Beyond those brief notes, I will let the album speak for itself.