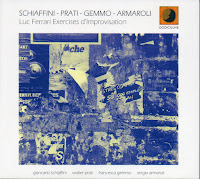 Some music is so totally boundary-breaking that not one media outlet will mention it, despite the quality it brings. This album is one example of this. The "Exercises d'Improvisations" were 'composed' by French composer Luc Ferrari in the seventies. Ferrari was a musical sponge, and he tried to integrate many styles in his music, from Olivier Messiaen, Varese, Honegger ... but also Cecil Taylor, and later in life, before his death in 2005, he was also interested in the music of DJ Olive and eRikm, who performed some of Ferrari's compositions.

The foundation for each of the improvisations on this album was originally created by Ferrari by recording electronic sounds on magnetic tape around which up to eight musicians are expected to improvise. The instruments are not specified. "Each exercise is based on continuity: harmonic or melodic color, rhythm, etc. They are intended for amateurs, professionals or students and may take place in concerts." Ferrari further indicates that the taped sounds can be used by maximum two speakers, playing at the same volume as the instruments. The interpretation of the music itself, can be done "in any style the musicians want, from classical over 'contemporary' to jazz and even folk music". He writes: "It would be best to escape clichés, and to avoid falling into new ones, it's possibly best to forget all cultural constraints and conventions (...) Every study is determined by a 'tonalité de flou harmonique' (a tonality of harmonic soft focus?), which is best used as the starting point around which to keep evolving. The music consists of schematic hypotheses with which the musicians can play as they see fit, without being held prisoner by them, but rather as a means to communicate physically with the other band members".

Two other interpretations already exist of his 'composition', one by his wife Brunhild and the GOL Ensemble, the other one by Italian pianist Ciro Lombardi. Needless to say that all three albums are totally different, ranging from ambient over modern classical to more jazzy.

The ensemble we have here consists of Giancarlo Schiaffini on trombone, Walter Prati on cello, Francesca Gemmo on piano and Sergio Armaroli on vibraphone.

What you will hear indeed defies categorisation. Clearly, jazz is very present, if only because of the choice of instruments, but then again, this remains inherently harmonic music, with no attempt to look for dissonance or disruptive sounds. "Exercise d'Improvisation 4" is even almost a straightforward blues in harmonic scale and deep sense of solitude. And yet, the result is quite astonishing. The music is calm, gentle, soft-spoken but intense, with contrasts and tension. The four musicians weave their sounds like a silk veil, delicate to the touch, serene and restful, but within this subdued space, emotions oscillate between joy and sadness, often within the same improvisation.

"It is indeed society in all its aspects (revolt, joy, suffering, intimacy and love) that is the very foundation of his themes that he translated into its creations. Each of his creations therefore implies these contradictory emotions", writes his wife Brunhild Meyer-Ferrari in the liner notes.

It is fascinating to hear how genres can blend into something welcoming and unheard. It is equally fascinating that the foundational tapes, dating from 1977, can now, so many decades later, inspire artists to refresh and re-think and expand on it. All four musicians on this album manage to work with the sparse original hints to create a wonderfully original and subtle listening experience.

Sensational music. Thanks as ever Stef for the review and highlighting its existence.
The vibes and trombone combination bring to mind Moncur and Hutcherson even though the music is far from that in style and execution.