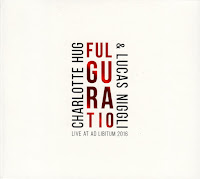 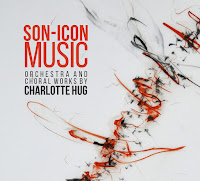 Swiss violist/ singer Charlotte Hug is one of the great soloists of free improvisation, layering dense bowing and extended vocal techniques into performances of shamanic, transformative power. Her brilliance is undoubtedly best experienced live, but it’s clearly apparent on the solo CD Slipway to Galaxies (2011), while her collaborative range can be heard in duos with Frédéric Blondy, on Bouquet, and Fred Lonberg-Holm, on Fine Extensions (all issued by Emanem). These two recent CDs present different dimensions of Hug’s music, one in an improvising duo, the other as composer/ conductor.

While Hug and drummer/ percussionist Lucas Niggli are both residents of Zurich, they had never played together before being invited to perform as a duo at the 2016 Ad Libitum festival in Warsaw. I’m not sure that should come entirely as a surprise, for one might imagine something diametrically opposed in their fundamental approaches. Hug works in large gestures, compounding and layering shapes that are elastic in pitch, using a “soft bow” technique to elaborate walls of shimmering, shifting, sliding harmonics; Niggli is a demon of precision, whether providing orchestral emphasis or polyrhythms. What they share, however, as this performance makes clear from the start, is a rich appreciation of resonance, a luminous continuum in which each drum or bow stroke, each vocal scrape, ignites a response in air. Niggli’s precision extends to the minutiae of sound, playing with details of overtones, sparking, providing ignition.

The titles here are drawn from arcane meteorology with suggestions of alchemy, fundamental mysteries they couldn’t be more apt. There are miracles of interaction in which worlds somehow seem to overlap, as in the convergence of the ultimate “Perlucious,” in which Hug’s scratch/squawk vocal is pure shamanism, Niggli’s inflammatory drumming the flickering insistence of light in the cave. In “Lacunosus,” his drumming complements and highlights the sculped accuracy of Hug’s auto-counterpoint of voice and viola. In contrast to one’s initial questions, the two musicians’ approaches couldn’t be more alike.

On Son-Icon Music, Hug forgoes both her viola and her voice, turning to roles as composer and conductionist. She has worked extensively with “Son-Icons,” her term for graphic scores that mingle notation and gestural painting, sometimes with conduction and video. She’s building on her decade-long membership in the London Improvisers Orchestra, a key group in the development of large-group improvisation. Son-Icon presents two of Hug’s pieces, one for orchestra, one for choir. The results that Hug achieves here are extraordinary creations, works that feel at once through-composed and fluid, achieving great power and mystery.

The orchestra piece, Nachtplasmen, is a 36-minute work performed by the Lucerne Festival Academy in 2011. One is presented with a series of textures that gradually evolve, expanding with the membership of the orchestra; new solo voices appear to initiate new segments. The work begins in an oscillating hurdy gurdy (here a descriptor, not the instrument) of high string harmonics, then gradually follows a three-movement pattern.

The outer movements are conducted; the middle movement leaves the players to their graphic scores and their listening skills. The middle movement has a particularly forceful moment from a cello along with a sustained trumpet passage and some interesting pointillist exchanges among instruments of different orchestral families. At its conclusion, the work achieves a density and power akin to a factory.

It’s a fascinating work, both in the description of its methodology and the music that results, though for this listener there’s also an element of frustration. I want to know the work better, to understand its sources and its individual and collective parts and their relations, what proportional mix is active in its method at any given moment, whether composed, conducted or spontaneous. We read that it’s “made of graphite drawings, which were quite literally created in the tides of the Irish Atlantic; Charlotte Hug assigned an individual Son-Icon to each player…” How did the tides “literally” make them? What is this further element of chance? The illustrations on the CD aren’t associated with one work or the other, but include a spine-like illustration and another that appears to be abstracted, almost blurred, notation.

The fascination and frustration persist with the choir piece “Inn Cammino” performed by the via-nova choir of Munich in 2013. The notes contrast the inspiration of the high mountain streams of Switzerland with the Atlantic tides and indicate that two Son-Icons were given to each singer: one suggesting “the different formations of the inside of the mouth; the second…suggests a spinal form and directs the eye to the system as a whole.” For this listener the overlapping patterns and short rhythmic phrases suggest at times a “parlement of fowles,” or “conference of the birds,” and too, the contrasting movements of different registers can suggest the motion of water over stones, though that may be my own susceptibility to suggestion.

One is grateful for an opportunity to hear these pieces, already a few years old. They’re striking examples of what visual scores, conduction and requisite close listening and looking can achieve. I only wish that the lack of accompanying materials‒the son-icon graphic and video scores themselves, video rather than just audio documentation‒didn’t make me feel like I literally don’t know what I’m talking about.