Prolific Catalan (but with strong Portuguese roots) drummer-percussionist-improviser Vasco Trilla has released more than 15 albums since the beginning of 2018, all of which highlight his idiosyncratic conception of time, pulse and space. His recent solo project and collaborations with like-minded improvisers offer insights to his masterful, brilliant work, and his unique ability to transform all objects into percussive machines. 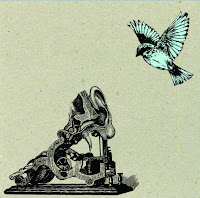 The Torch in My Ear is the third solo percussion album from Trilla, following The Suspended Step(Discordian, 2o16) and The Rainbow Serpent (FMR, 2016). It is titled after the memoir of novelist-playwright Elias Canetti (1905-1994, who won the Nobel Prize in literature in 1981) and - as the liner notes mention - who wrote elsewhere that “every completely unknown language is a kind of acoustic mask; as soon as one learns it, it becomes a face, understandable and soon familiar”. The information about this album is scarce, the names of percussion instruments and devices are masked, and the cover only informs that it was recorded at Golden Apple Studios in Barcelona, without mentioning the date of recording.
Trilla structured three extended and multilayered pieces to sound like masks. All seem to conceal their complex vocabularies and syntax, hidden behind its initial, disarming opening sounds. These pieces sound as developing organically, almost like vibrant percussive machine textures, as Trilla described it himself recently. All have similar, disciplined and slow-cooking conceptions of space and time, but all evolve in totally different intriguing manners. The first one, “Acoustic Masks”, offers quiet and distant storms that gently touch and go with their ritualist, meditative sounds. These resonant and enigmatic sounds offer at first rare disarming qualities, but as this piece gains more power and volition these sounds become more invigorating. The second piece, “Unsweep”, also begins with meditative percussive sounds but suggests a different kind of tranquil atmosphere, where echoing sounds float and vibrate gently in space. Soon these ceremonial sounds are disciplined in clear rhythmic patterns, methodically gaining more timbral and rhythmic nuances until this piece morphs into a gentle dance but ends in a tensed note. The last piece, “Solenoid” begins is the most disciplined one. Its minimalist and peaceful spirit sound like an ethereal abstraction of Steve Reich composition. 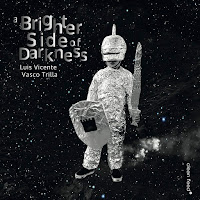 A Brighter Side Of Darkness expands the strategy of The Torch in My Ear to a duo format with frequent collaborator and resourceful improviser, Portuguese trumpeter Luís Vicente, known from the groups Fail Better!, Chamber 4 and Clocks and Clouds. The three extended pieces were recorded at the same location, the Golden Apple Studio in Barcelona on February 2018, and all are characterized by similar ascending motion. These intimate pieces build slowly build from sparse, minimalist and dark sounds and gestures, patiently shaped into dense and complex physical bodies of powerful sounds, but never reach a cathartic phase and suggest a purifying, almost spiritual experience.

The first piece “Untold Stories” begins with distant and subtle resonant sounds and tormented breathes, but Vicente and Trilla methodically sculpt these otherworldly, cryptic sounds as coherent and detailed texture. This dense textures insists on its very own voice and aesthetics - experimental, risk taking and demands repeated, careful listening before it begins to make sense. The second piece, “To Angels and Demons”, offers a much more delicate and minimalist atmosphere, ritualist and contemplative at first but later this atmospheres is channelled into a fragile, still ceremonial yet often melodic and playful texture, but in its very intimate and reserved manner. The last and shortest, “Where You Belong”, is the most tensed and mysterious one, but keeps its intimate, quiet tone as Vicente and Trilla exchange disturbing secrets. 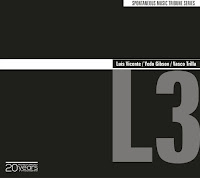 Vicente, Gibson and Trilla are fearless and risk-seeking improvisers, masters of extended techniques who enjoy the non-idiomatic, free-improvised act of walking on a thin lines, farthest and higher from any comfort zones of clear rhythmic patterns or harmonious melodies. The interplay of the seven short pieces, totalling in only 33 minutes, is quite eccentric and anarchist, nervous and and tense, sometimes even conflictual and totally manic. L3 has developed their own secretive, highly expressive language, with no attempt to sketch coherent or linear textures. Still, these abstract, chaotic textures flow with great focus on detail and radiate irresistible power and imaginative beauty. 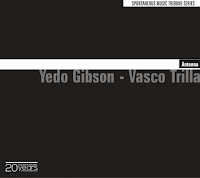 The second duo album from Gibson, who appears here on the baritone and soprano saxes and the Serbian flute frula, with Trilla was recorded at Scratch Built Studio in Lisbon on June 2016, again, as part of Multikulti Project’s Spontaneous Music Tribune Series. Gibson and Trilla cement their strong kinship on Antenna, playing as one. Both echo the common description of the two-person edition of Spontaneous Music Ensemble - late British drummer John Stevens and sax player Trevor Watts - who played “as if they were one body”. Trilla expands this description and adds: playing free, in a brotherly manner and letting your imagination run free.

The six, free-improvised pieces are energetic, emotional and highly inventive. Trilla always challenges Gibson with surprising, contrasting gestures. He colors Gibson’s trance-like, fiery soprano blows with resonant, ceremonial bells on “Aperture”; takes him to a sensual dance on “Dipole”; punctuate Gibson’s rhythmic breaths and blows on the baritone sax on “Fractal”, first with playful but meditative touches of the cymbals and bells and later with powerful polyrhythmic patterns; mirrors his vibrant soprano calls with resonant metallic sounds on “Whip; plays fast cat-and-mouse games with him on “Array” and suggests a fragile, minimalist drone on the abstract and almost silent “Isotropic”. 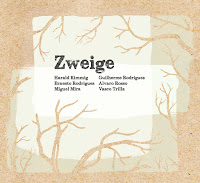 Obviously, the two “Zweige” pieces explore many aspects of extended bowing techniques, including by Trilla himself who bows the cymbals, careful, investigative timbral search and delicate, nuanced interplay. The role of Trilla is crucial in holding together and anchoring these strings-based textures. On the first piece he acts like a shaman that adds subtle, ritualistic bells and other percussive and bowing sounds, contrasting the restless and tensed but minimalist interplay of the strings instruments. The second piece is more energetic, but keeps a minimalist atmosphere. The role of Trilla is more crucial. He now acts as a sorcerer that mirrors with with his delicate, rattling percussive sounds the multilayered, resonant gestures of the strings instruments, keeping these nervous bowed sounds linked together, and channel the stringed commotion into a meditative coda.