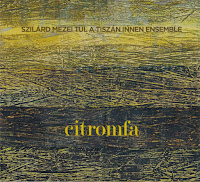 The Tiszán is a river that at one time flowed entirely within the borders of the Kingdom of Hungary. It of course flows as it always has; only the immaterial boundaries of human dominion have changed. It passes to the east of the city of Senta, where composer Szilárd Mezei has lived all his life. From there it merges with the Danube (Europe’s second longest river, which passes to the south of Novi Sad, where Szilárd and many of his colleagues perform and where this album was recorded) in the very heart of the Vojvodina province, and then on some 1300 km to the Black Sea. Túl a Tiszán Innen roughly translates to English as Beyond the Tiszán from Here and is the name bestowed to Mezei’s ensemble dedicated to the union of Hungarian folk, jazz, and classical music. For their third release “Citromfa” or Lemon Tree, the 11 piece ensemble presents a 9 song, 2-disc set with a run time of just over two hours, every second of which is filled with intriguing, exotic, and beautiful music. Using the themes of traditional Vojvodinian folk songs as a foundation, Mezei extrapolates remarkable arrangements from the simple melodies that extend and supplement their underlying essence, elevating them to a higher level of sophisticated expression. This advancement is enriched by the implausibly brilliant musicians Mezei surrounds himself with. Joining Mezei on this release are his long time colleagues, drummer István Csík and double bassist Ervin Malina (who make up his trio), as well as the remainder of his Septet: Bogdan Rankovic on bass clarinet, alto saxophone, and clarinet, Andrea Berendika on flute and alto flute, trombonist Branislav Aksin, and Ivan Burka on vibraphone and marimba. In addition the ensemble features Béla Burány on baritone and soprano saxophones, violinists Tijana Stankovic and Ákos Keszég, pianist Marina Marina Džukljev, and of course Mezei himself on viola. This album was released late last year and I’ve been under its spell since. The words have been slow to come to me, and so I do apologize for the tardiness of this review. I’ve used the English translation of all the song titles below with the intent of demystifying the content for our non-Hungarian speaking readers.

After a brief introductory passage, the first track "A Young Herdsman from Sándorházi" is centered on the sing-song melody of the original tune superimposed over a piano/double bass ostinato. Berindika's flute playing is beautiful here, fluttering over the surface like dragonflies darting over a pond. Just as striking is Džukljev's piano, which along with the rhythm section provides the beating heart of the piece. "Sour Cherry Grows on High Trees" begins with the main theme sketched out in various shades of contrasting timbre, the embellishments and counterpoint building as the song unfolds. The complex inter-ensemble playing is grounded by the hearty rhythm of the piece. The strings are more prominent here, as is Askin's trombone, and we get a tasty solo from Malina on the double bass towards the end. "Come with me to the Ball, My Sweet Darling" is a moody arrangement that begins with a captivating bit of orchestral-tinted potpourri. It plays out dramatically, with the soft, romantic passages erupting into swells of harmony and bouncing rhythm from the full ensemble. There is a particularly nice segment towards the middle where Rankovic's bass clarinet wraps ribbons of reedy color around Džukljev's velvety piano line. Burka's quavering vibraphone solo near the end is a gorgeous and subtle touch. "My Chestnut Horse's Been Lost" retains the orchestral feeling of the previous track, building up a forest of sound that is haunted by Berindika's flute and Mezei's viola. Dramatically rendered but much more somber than the previous track, it's perfectly placed in the album's track sequence. The last piece on the first disc is called "A Women-Ridiculing Song" and features a romping, ornery melody hovering on a post-bop rhythm which is pocked with piano stabs and soft marimba. Rankovic throttles his saxophone, yielding a fierce solo of fiery passion.

The second disc begins with "My Mother's Rose Tree" which is built around an uplifting, regal melody that’s almost anthemic in its rendering. Csík provides a rolling bed of uneven percussion for the folky strings and the sparse, complementary piano. The ensemble takes turns soloing over this foundation, where a single voice appears and is eventually overlapped and overtaken by the next soloist. The saccharine theme is repeated in intervals by the ensemble like a child returning to an unguarded cookie jar. There is a brief section of group improvisation towards the conclusion of the piece before the final statement of the main melody that imparts a sense of totality and closure. “While the Betyár is Drinking at the Bar, His Sweetheart is Crying in the Window” is a bellicose and animated beast that juxtaposes melodious strands of folk melody with volatile, aggressive playing from the ensemble. The piano passage is especially brooding, finding Džukljev utterly attacking the keys. Burány delivers a terrific solo on baritone sax, resplendent with assertive squelches and honks. The next piece is a medley of descants, "Gosh! What a Bad Place This World Is/When Sándor Rosza Gets on His Horse” and is my favorite piece of the collection. It’s cinematic in its advance, building from the gentle melancholy of flute, bass clarinet, and pizzicato string figures to several swelling crescendos of exquisite orchestral airs. The combination of bass clarinet, baritone sax, and trombone is a favorite of mine and provides a thick bed of roiling thunder for the gentle showers of flute, strings, and piano. Csík’s percussion is faultless and subtle; he illuminates the very edges of their swirling sonic world with light rolls and whispering cymbals. The solos on this piece are a particularly outstanding example of how in-sync the ensemble is with Mezei’s arrangements. The piece sounds like organic clockwork, the players in lockstep with the aspirations of the maestro. The final piece of the collection, the eponymous “All the Twigs and Leaves of the Lemon Tree” features another captivating piano ostinato as the root, at times highlighted with flute, soft reeds, and brass. Mezei and Csík summon beguiling solos that are both mellifluous and full of dynamism, after which the ensemble closes the set with a multifaceted flourish of symphonic verdigris.

Mezei’s sonic brew is intoxicating, and I haven’t been able to get enough of it. This third double disc collection from the Túl a Tiszán Innen Ensemble is a masterwork of infectious melody and intricate orchestration (if you haven’t heard them I warmly endorse the other two collections as well). This music is his own; it’s where he comes from and where he’s going. Certainly there are allusions to the music of Bartók, Mingus, Szabados (another artist underappreciated in the west), and Braxton but they are mostly peripheral. Mezei’s work is singular in its constitution. He’s a gifted artist, whose drive and passion is the equivalent of the aforementioned masters, but who has emerged at a time when much of the world’s cultural fixations have become moribund and oblivious. But like the Tiszán, Mezei’s course will flow as it always has, towards his muses and passions with determination and ambition; and for those so inclined, the juice is well worth the squeeze. Highly recommended!
Paul on Friday, May 24, 2019
Share

I enjoyed “Karszt” and its quirky yet sumptuous arrangements. It looks like I’ll have to add this one to the list.

Quirky yet sumptuous is a very good description. It's a lot of fun to listen to and there are some very tender moments mixed in as well, very balanced. The folk melodies are real earworms.