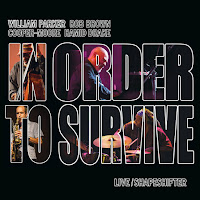 William Parker has been featured on more than 150 albums and was once described by New York's Village Voice as 'the most consistently brilliant bassist of all time'. He has worked with Cecil Taylor, is part of several combos, has written 6 books and encourages young performers.

This CD is a live recording of 2 sets, the first set is the suite ' Eternal is The Voice of Love' which consists of 5 tracks and the second set is of 6 tracks including the achingly beautiful 'Newark' written for Grachan Moncur III. All tracks are Parker compositions and the essence of each is different, demonstrating his ease of transition from one musical message to another.

On this double album William Parker, together with Rob Brown on alto sax, Cooper-Moore on piano and Hamid Drake on drums with additional vocals on 2 tracks from Dave Sewelson makes interesting and vibrant music. In Order To Survive is one of the great jazz groups of the past 25 years and was Parker's first small group, formed in 1993. Drummers have changed but the sax, drums and piano have enjoyed a long association which is evident on these recordings.

The first CD is remarkable not just for the beauty of the music but for the intrinsic communication between the members of IOTS which is tangible, though maybe unsurprising given the caliber of the individuals and longevity of their association. In 'Entrance To The Tone World' the bass leads an assault on the senses, aided and abetted by several switches in cadence, rhythm and key with subtle and not-so subtle sections switching from sax driven interludes over eclectic drumming with the piano of Cooper-Moore maintaining almost classical progressions underneath, creating a sound scape where the differing sounds shear up against each other at times, yet work together at different places. An interesting and well developed musical journey over 20 minutes or so of switch-backs and off-shoots of rhythm, techniques and playing style. Rob Brown's sax devours much of the limelight in some sections, whilst the percussion of Hamid Drake never loses touch and drives changes in rhythms, which the others (nearly) always follow. There is no a loss of interest for even a second because as soon as a rhythm, tempo or style is established, it is switched for an apposite one. Excellent music.

'Color Against Autumn Sky' has a very cool beginning with sax nonchalantly rolling over the top of a swingy rhythm section , then there is a shot of Calypso before the rhythm changes again, the bass is now driving and then the listener is treated to an extended piano-led section which is beautiful and which uses the centre section of the keyboard extensively and drives the motion towards the climax of the piece, aided and abetted by Hamid Drake's intuitive changes on the drums. A carefully introduced bass section is worked out with the bass gradually emerging from the background to alter the rhythm again and drive the piece to its finish. Clever, wonderful and so engaging.

'If There is A Chance' is an altogether different beast with a gentler atmosphere, a thoughtful approach and some atmospheric piano playing and haunting reeds. ' A Situation' is preluded with piano introduction before the sax enters, weaving its way around and between - literally - the notes of the piano chords and progressions. At times, it loses its way but stick with this one- after 30 seconds the two are entwined in a dance where the piano undermines and underpins virtually everything the sax is doing - and it works so well. In one sections the piano echoes the scale descent of the sax and in another, the sax follows the trail laid down by the piano - it is a game of chase and chased. Add the drums with Hamid's familiar rolling lower end sounds and bass going into a drum solo for the final third it is a wonderful track. 'Birth Of The Sunset' is scaffolded around a framework from the beginning with constant bass vibrato under gentle percussion and piano for the first minute and a half before the sax enters and then breathily introduces a different pattern. The never diminishing bass and the constant beat of the percussion - be it ever so gentle- add to the sense of build up and glory of a sunset developing, fading and going. Toward the finish the beautifully bowed bass adds to a sense of awe.

'Demons Lining The Hall Of Justice' is old school improvisation around themes and tempos dictated by loose arrangements. It is conceptual in places, free in others and held together by a pervading to and fro between the four musicians which gives it dynamism and creates a sense of cohesion from the individual elements across the 23 plus minutes. The piano led section is impressive and encourages the percussion with its energy - duly returned in spades.

'Drum and Bass Interlude' is a conversation between bass and drum - swingy, rhythmic and driven by the relentless syncopation of Drake as he pounds the drums, and the bass responds, fitting snugly into the spaces left in the rhythms - which are very small yet the bass creates a theme, a response of its own - this is the highlight track for me in spite of the glorious playing across the rest of the album. If you sit still during this track, you must be dead.

'Newark' is introduced fugally by bass, followed by percussion, then sax and finally, a split beat separates the piano entry. This piece is thematic in the first part, diverges into something of a Q and A in the second third and then turns into a reflective final third with piano languorously leading the bass, which responds with some speedy little quietudes and then some string-bending curves to finish. 'In Order To Survive' is this group's masterpiece and here it is played with relish as the entire band sweep in turns to lead, follow and even interrupt appropriately. It is a well worked and familiar piece to the band but of course, being improvisers, it is different with each play and hearing. A delight here. The deeply swinging section led by the bass is wonderfully sent up with a strippers rhythm from Hamid Drake, which adds humor. The vocals are fine too with the sax making some mighty fine sounds underneath. This track includes so many references - we are 'digging it' , warbling, smooth singing, blasting, running with it and then smoothly coming down a long curve - it is a journey worth making. The band are having so much fun! 'Eternity' finishes the CD and feels like an instant. A beautifully flowing track with space for everyone and some exquisite bass from Mr Parker.

Across the CD there is a sense of a group of musicians enjoying the numbers, yet also a reverence for the music and the past along with their own unique takes on the outlines given. This is an enjoyable album whether you are familiar with any or all of the players or not. Nearly every jazz reference, from swing to bop is here with some very controlled leading work sitting fine alongside freely improvised and individualized sections. That is what makes it so good - it is the sense of each musician forming their own unique part, yet they come together to create that cohesion, the oneness which good music is. An album full of wonder in every sense. Wonder full.

This album releases on July 5th.


First CD/set track list:
Eternal is the Voice of Love
i.Entrance To The Tone World
ii. Color Against Autumn Sky
iii.If there is a chance
iv A Situation
v, Birth Of The Sunset