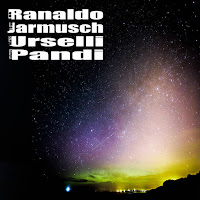 This is an interesting assembly of artists brought together by the Grammy award winning producer/audio engineer/musician Marc Urselli for this long player from Austria’s Trost Records, the idea being that none of these gentlemen had played with each other before. I would venture to say that the vast majority of our readers have at least a passing knowledge of who Lee Ranaldo is. Sonic Youth will always retain a special place in my personal nostalgic cosmos due to memories from my youth associated with their music. Of all the side and post-SY projects the members have been involved in his generally resonate the best with my tastes. I haven’t liked all of his solo ventures and projects, but a few that come to mind are his collaborations with drummer William Hooker, his trio Glacial with Tony Buck and David Watson, and of course the avant super group Text of Light (Ranaldo, Alan Licht, William Hooker, Ulrich Krieger, Tim Barnes, Christian Marclay, and DJ Olive who improvise music to the films of Stan Brakhage). My familiarity with Jim Jarmusch is mainly from his 1995 film Dead Man, and more recently his film Paterson. Apparently he was also a member of a couple of New York no-wave bands, one with Robin Crutchfield called Dark Days, and another called The Del-Byzanteens. Drummer Balázs Pándi is has an extensive resume including collaborations with Mats Gustafsson, Keiji Haino, Roswell Rudd, Thurston Moore, Joe Morris, Jamie Saft, and is a member of Slobber Pup. Urselli himself is John Zorn’s preferred engineer, having recorded all Tzadik releases since 2006 according to my sources, which I’m taking as accurate since I don’t have the time to cross-check the 100+ releases individually (feel free to leave a comment if this is inaccurate).

The album cover itself alludes to the contents; all of the tracks are airy exercises in atmosphere building and spacey turbulence. There’s no point in going into details for each track as the collection plays out like the extended jam session between four like-minded-yet-unacquainted musicians it is. Ranaldo and Jarmusch share guitar duties and spend most of their time probing the margins with sparse tentative wandering, their chime-like plinks and swells drenched in reverb and echo. Urselli’s bass is very subtle and his use of laptop is inconspicuous, as is Jarmusch’s use of midi-synthesizer. Due to the effects used on the guitars it’s hard to identify the source of any particular sound, and since I’ve mentioned Brakhage already, this effect reminded of the way he described seeing the Battleship Potemkin on video and how the medium seemed dull and shapeless compared to the version that he had seen on film. The album would be completely amorphous without the percussion of Pándi, who seems consigned here to provide some underlying structure or container for this psychedelic Jell-O mold.

I’m not saying that the album isn’t decent enough to listen to, especially in a passive sense, just that I didn’t find anything attention-grabbing to really focus on. It doesn’t feel as if there is a particular direction the group is shooting for, and this in my opinion relegates the album to a series of meandering tone poems that (aside from Pándi’s drumming) have more to do with the equipment used than the ideas of the musicians themselves. Overall though, it’s nice to play in the background and I’ve enjoyed it in that respect.