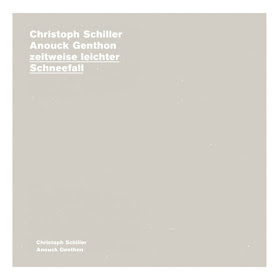 As the title, zeitweise leichter Schneefall (Intermittent Light Snowfall), suggests, this album is delicate, textured, and punctuated. Christoph Schiller has been experimenting with the spinet for several years now, leading a wave of minimalist pioneers with his Renaissance tools and, more recently, his voice. Anouck Genthon is a violinist and ethnomusicologist who has been involved in the electroacoustic experimental scenes in France and Switzerland (think Insub Records). Both artists show a distinct interest in bringing the old (instruments, sounds) into the present through extended techniques, microtonal variability, and amelodicisim.

Composed of seven tracks ranging from one-and-a-half to seven minutes in length, Schneefall offers Schiller and Genthon numerous opportunities to explore different paths all based around certain elongated tones and their resonances. In this pursuit, Schiller and Genthon pose an interesting contrast to each other. Despite the apparent closeness of the microphones, Genthon’s playing is impeccably crisp, especially compared to the harsher, nonidiomatic techniques she employs in other projects. (There are deliberate exceptions in a few passages, but this trend largely holds.) Schiller’s playing, on the other hand, resolves around the interior of the spinet. One can hear his forceful plucks and hand-muting, just as one can hear the fuzz of his whispers, hisses, and hums. These disparities in tonal quality are all the more striking as they are set against a starkly silent backdrop. And, as one might expect, silence and near-silence play as much of a role in this music as do the traditional instruments themselves. Although it seems little new musical ground is broken, here, much is explored more deeply. Another worthwhile addition to the Schiller catalog and, I imagine, the Genthon catalog, as well.