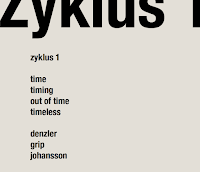 “Jazz is certainly a music of perfumes (on and in bodies)”, declares the saxophonist Seymour Wright in the liner notes that accompany some Sven-Ake Johansson’s drawings for this double CD. A joint release of Johansson’s SAJ records and Umlaut records. “And bodies through these perfumes. Cloth, skin wood, seat, spit and smoke” Wright continues. This could be the perfect description for the music of this trio. Bertrand Denzler on tenor sax, Joel Grip on double bass and, ever flexible and kinetic, Sven-Ake Johansson on drums. They know each form the Neukollner Modelle recordings, they have struggled before, so many times, with the pains of using improvisation as a language to communicate.

As many times in Umlaut’s recordings, jazz is the medium. Many times as a basis, other as a way to interact, the jazz tradition seems incorporated in almost all of the labels recordings. This is the case in zyklus 1. The coltraneish tenor of Denzler is the point of departure for the two tracks of the first CD. He struggles and pushes hard to follow the fast delivery of Grip’s bass, while Johansson’s improvisational skills are combined with the ability to maneuver through the tradition of the great percussionists of jazz have created. Of course Johansson is one of the greats…

What always amazes me, and it more clear on the two tracks of the second cd, is the combination of improvisation as a tool to communicate and navigate through a recording combined with the will to use melody (or melodic passages) as a the material that brings everything together. It reveals a higher level of interaction, a sometimes total understanding of each other’s playing. But not just that. An understanding of how the fellow musician, or comrade, thinks or wants to play.

Joel Grip is an extremely subtle presence throughout both CDs. Nevertheless he is the backbone on this release, providing time and space for Denzler to venture into some fierce blowing and Johansson to explore his drum set. I kind of felt, at some points at least, that I was listening to two soloists and a double bassist that took care of everything else. Of course this is only one of the reasons I really enjoyed zyklus 1. On both CDs it is a game of balance, of three people that use their skills and the bodies of their instruments (to recall Wright’s liner notes) as tools for a component power that is this trio. A power based on tradition but always forward looking.