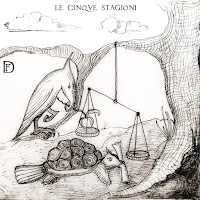 Despite the band's German name, and the album's Italian title, this is music from Russia, performed by a band consisting of Anton Efimov on bass-guitar and effects, Evgenia Sivkova on drums and saxophone, and Edward Sivkov on bass clarinet, saxophone and domra, the latter the father of Evgenia. The band is usually a duo, but the addition of an extra saxophone, makes this even for them an unusual album, at the same time lifting the music to a much higher level.

Both bass and drums lay a very dense foundation of industrial doom, with neither instrument clearly recognisable, but still rhythmic enough to become hypnotic. The sax improvises over this never-ending flowing sonic magma. The improvisations of the sax only add to the deep sense of despair, angst and hopelessness.

Unlike our normal four season calendar - and Vivaldi's - they present us five seasons, as described in the "Illuminati calendar", the secret society which fought religiously influenced state power in the 18th century (and maybe still active today, you never know with secret societies). In the case of Der Finger, they also refer to the novels by Robert Anton Wilson, and his "Illuminati trilogy". I have to rely on Wikipedia to know more about him: "Wilson described his work as an "attempt to break down conditioned associations, to look at the world in a new way, with many models recognized as models or maps, and no one model elevated to the truth". His goal being "to try to get people into a state of generalized agnosticism, not agnosticism about God alone but agnosticism about everything."

Understanding the context and the intent illuminates the appreciation of the music. The music indeed not only breaks down all conventions, but at the same time - and that's possibly the most fascinating about it - it originates without too many of today's influences in avant-garde music, allowing it to carve out its own space, its own sound, dark and relentless and scary and compelling.

The tracks are named by the original German names of the five illuminati seasons, each consisting of 73 days, "representing the development stages of everything from complete chaos to complete fuck-up (SNAFU) and then again in the eternal cycle".

I can only recommend this.