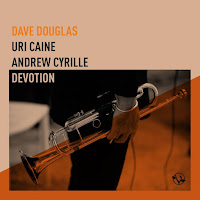 Perpetually iconoclastic, idiomatically omnivorous, and always surprising, Dave Douglas and Uri Caine have for over 25 years teamed up periodically to merge their prodigious musical minds. Both are first and foremost jazz musicians, but that’s never been a label to limit them, as Caine’s piano recordings have frequently engaged the classical tradition, from Bach to Verdi to Wagner, while trumpeter Douglas has brought jazz into conversation with myriad other musical languages, including recent ventures into electronica (on High Risk, 2015) and the fourteenth century French Ars Nova (Fabliaux, 2015). Although their separate paths have taken them in manifold directions, when they do occasionally converge the results are always worthwhile, as on Present Joys (2014), a compelling document of their ongoing exploration of early American Sacred Harp music. On Devotion, they stick to a much more jazz-focused repertoire, and who better to team up with than Andrew Cyrille, one of the legendary embodiments of creative jazz, and someone whose own discography has been remarkably diverse and accomplished during his late-career renaissance?

Compared to their various boundary-breaking projects, this one allows Douglas and Caine to explore the capacious interior of the jazz tradition itself, and they are adept in tapping into its multifarious riches. Each piece bears a dedicatee, and the range of jazz luminaries represented, from Carla Bley to Franco D’Andrea to Mary Lou Williams, already hints at the panoramic perspective on offer; so too does the range of non-musical inspirations, from Jerome Horwitz (“Curly” of the Three Stooges) to long-distance running legend Steve Prefontaine.

From the opening bars of “Curly,” played as a duet by Caine and Cyrille, one can already appreciate the sympathetic conversation that will unfold on these ten well-crafted tracks. Caine jumps all over the keyboard, with jaunty phrases galore, along the way hinting at his abiding interest in early jazz forms like stride and boogie-woogie, while Cyrille maintains his characteristically fluid, rhythmically adroit commentary, with enough independent interjections to keep the conversation moving forward. Then when Douglas joins in on “D’Andrea,” the trumpeter’s nimble quickness takes center stage, with an insouciant air that keeps the track light on its feet, Cyrille’s expert use of the kit perfect in establishing a dance-like accompaniment. “False Allegiances,” dedicated to Carla Bley, is an even more overtly danceable piece, with a tango structure that continues its subtle momentum even amidst its darker-hued resonances. Then there is the funky “Miljøsang,” with more of Caine’s bouncy exuberance and Douglas’s down-home charm.

Other pieces bend toward the lyrical, especially “Pacific,” a gorgeous ballad played with superb restraint by Douglas, Cyrille’s delicate work on the cymbals ideal in augmenting the emotion of the piece. “We Pray” is just as affecting, with an even more somber texture. And the closer, the album’s title track, is a hymn-like revisiting of the Sacred Harp tradition, and it encapsulates the record’s central theme of homage and dedication, with a wistful spirit of yearning for freedom, expressed elegantly with Caine’s and Douglas’s intertwining expressions and more of Cyrille’s masterfully understated support.

While it may not possess the ambitious concept of these musicians’ more attention-getting efforts, Devotion is all the more effective for what it does offer: imaginative, well-executed jazz that draws out terrific playing from all three participants, forging a shared vocabulary that says just enough to make its collective statement powerfully and memorably.