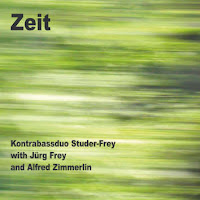 Daniel Studer and Peter Frey (both on bass and electronics) play freely for 10 tracks across 52 minutes on Zeit, with Jürg Frey (clarinet) and Alfred Zimmerlin (cello) joining them for four of those tracks. Kontrabassduo Studer-Frey is a rich, long-standing collaboration that blossomed around the time the duo recorded together on Markus Eichenberger’s Domino Concept for Orchestra during 2001. Beyond recording as Kontrabassduo with Zimmerlin on Zurich Concerts, Studer plays with Zimmerlin as part of the string trio Trio Kimmig-Studer-Zimmerlin (with Harald Kimmig) and P. Frey plays with Zimmerlin as part of the string trio KARL ein KARL (with Michel Seigner). J. Frey has recorded with Studer and Zimmerlin on Studer’s Ianus, and recorded Zimmerlin’s compositions on Edition Wandelweiser’s Kammermusik.

The four tracks where J. Frey and Zimmerlin join the duo (“Pars Prima,” “Pars Secunda,” “Pars Tertia,” and “Postludium”) were recorded live in 2004, and “Interludium” was recorded in studio in 2004. The rest of the tracks are home recordings from 2018. The earlier recordings reflect the early electroacoustic inclinations of the duo, while the later recordings reflect their acoustic inclinations. Despite the disparate times, settings, and approaches, these tracks feels like a cohesive collection. It won’t fool you as a continuous set, but perhaps one with pauses spliced out.

A variety of extended techniques and bowing techniques create groans, roars, scrapes, purrs, ripples, and pulses and at times mimic flutes, horns, and breath. The duo’s communication is often contrapuntal, rapid, and at times physical. “Initium” serves as a kind of digest of their technique and communication, with traditional arco mixed up with bowing below the bridge, tapping the strings with the bow, and sawing while sparring with contrapuntal plucks, slaps, and preparations. Time, volume, and space are always fluctuating, a deafening saw can be juxtaposed with the hiss of recorded silence, yet the momentum nearly always feels forward and the pacing is perfect. “Pars Secunda,” with its slow suspenseful build on a backdrop of urban recordings, feels like Bernard Hermann re-scored Le Cercle Rouge and “Excursio” jolts you with violent flaying sawing that suddenly stops and rebuilds, amassing tension until the basses begin to sound like horns and flutes. This kind of fluid identity is also achieved on “Interludium,” where electroacoustic alterations transmute typical bass plucks to electric skronk during a single sounding.

It’s a bassscape. But rather than ambient muzak to be osmosed it’s got so much going on that it’s difficult to not engage it. Sometimes it almost feels like a compendium of bass technique. A must-listen this year for lovers of improvised strings. And if you enjoy this, P. Frey also appears on Gasser 3’s Espresso Galattico on Leo from this year.

Thanks for reminding me of that Domino Concept for Orchestra since I haven't listened to that in years but remember it being excellent.