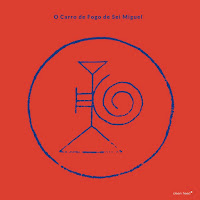 The title inspired by the William Blake poem Jerusalem, "O Carro de Fogo de Sei Miguel" is the 13th album released by Sei Miguel and his 4th consecutive for Portugal's Clean Feed Records. The 37 minute composition finds Miguel leading an octet through a web of blurred passages and melodic couplings that remains true to his sound even as he advances it into fresh territory. The octet is comprised of long time Miguel associates Fala Mariam, Pedro Lourenço, Luìs Desirat, and André Gonçalves on trombone, bass, percussion, and organs, respectively, as well as guitarist Bruno Silva, percussionist Raphael Soares, and saxophonist Nuno Torres. While "O Carro de Fogo de Sei Miguel" continues with the slowly developing jazz abstractions he's known for, here Miguel makes the most of the octet with Gonçalves and Silva's contributions giving the record tinges of "In a Silent Way", but without the forward propulsion of that album (and most 70's fusion in general), replacing it instead with a probing study of atmosphere, texture, and dynamics. It goes without saying that listening to music in the right setting and frame of mind can seriously enhance what you get out of it. That said I was lucky enough to listen to this album for the first time relaxing outside one evening watching lightning from a distant storm blister the horizon (I live in a very flat place). A canopy of lower hanging clouds was intermittently silhouetted beneath these bulbous forms in intriguing and jagged shapes, shifting beneath the vaporous lashings in contrasting purples and grays. Like the music it was moody, non-linear, and slowly developing and thus provided a nice visual metaphor that's returned to me on subsequent listens.

Miguel begins the piece with contemplative, slurred phrases on his pocket trumpet accompanied at first only by an irregular percussive knocking. Other elements slowly materialize around these forms, a swell of organ haze and cymbal hiss begin to blur the edges of the melody. Lourenço’s bass glides surreptitiously in beneath the whirling sound field, fleshing it out further as Silva provides wiry accent licks and some treble to the mix. Miguel drops out abruptly, leaving a hole that is filled almost immediately with a sprawling dialogue from Mariam and Torres. As their interaction fades Miguel returns to the fore and the piece takes on a more exploratory feel, the players stirring the cosmic gravy with focused, responsive interplay. The organ picks up volume (a virtual organ from the sounds of it), creating a celestial-tinted ambiance to which the octet adds only slight gestures, closing out the first half of the piece with a sigh. The second half begins with sparkling, vibrato-heavy organ swells that are accompanied with shimmers of cymbal and the half-hiccupped, half-strangled guitar playing of Silva. The mix gets very thin for a couple of minutes, just small wisps of hissing cymbal and half-heard sounds. The horns slowly rejoin, sounding a brief lamentation before again leaving Miguel as the sole voice to dual with the slicing guitar of Silva. The last third of the album provides instances of both activity and drift, but in less discrete sections. Combinations of instruments and sounds bleed into each other and coalesce just to fall apart again, getting entangled and lost, then reemerging mutated yet familiar within the delirious logic of the piece.

This album serves as a great document of the latest from the enigmatic Miguel, and I’ll add now that it’s currently a vinyl-only release. But I'd also add that if you don't have a turntable this would be a great album to buy one for. It rewards repeated listening and sounds best when played as loud as possible on speakers. Not because it’s a burner necessarily (though there are some tasty licks here) but because it’s subtle and ambient and will fill your listening space with its specter if given the chance. Sei Miguel continues his stream of excellent releases for Clean Feed with this Chariot of Fire, and because of the slow simmering nature of his art I have a feeling that the best is still yet to come.

Excellent review and excellent album. I've listened to this album many dozens of times in the last months. Sei Miguel has his own sound and signature phrasing on trumpet, which makes him easy to recognise in any blind test. His music is so full of paradoxes: ethereal and solid, wayward and charming, calm and lively. The amazing thing about the album is that the entire band is on the same page all the time. I think I'll listen to it a few more dozens of times.

Another fine review, Nick. What’s interesting is that although there’s no real forward propulsion, those long, Floyd-like organ washes seem to give what might otherwise be entirely atemporal music a definite sense of flow, acting like a fixative - bustling activity within a minimalist setting.

Right Colin, and I think flow is a great word here. There is always a clear sense of progression to his music. For as amorphous as it can seem on first listen there is an abundance of ideas and forms presented here. He owns his sound and is definitely a favorite of mine. Like Stef says I could listen to this album all day long, he says so much with so little.