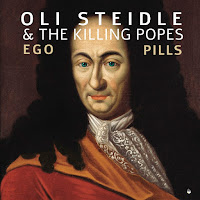 
It begins with a synthesizer imbued with the warmth of pre-millennium Saturday morning cartoon music, but with a deviant twist. What follows is 45 minutes of demented, avant-garde pop, of saccharine bubble gum laced with strychnine.

Oli Steidle and the Killing Popes consists of the eponymous Steidle on drums, Frank Möbus (Der Rote Bereich, Azul) on guitar, Phil Donkin on bass, and Dan Nicholls and Kit Downes on keyboards. Yes, that is two keyboardists.

Track titles – “Zombies,” “Isis,” “Nuremberg Heroin Lullabye,” and “Monopoly Extended” – indicate this music has a dark, sardonic side. This also comes through in the sheer freneticism of the music. Because of the musicianship and Steidle’s directive vision, however, Ego Pills comes across not as an unfocused muddle of styles, but a surprisingly tight album with a unique energy flow. (The only song that falls flat is “Speed Junky on Funny Human Darts,” a track that at reminds me of a funky Mike Patton when it works, but of Adult Swim when it doesn’t.) The music is lively and danceable, but the overall theme and mood is menacing and dystopian. It is a slice of the Zeitgeist, and one which captures the sense of disorientation and fracture, the awkward imbalance of progress and dysphoria in a way that only experimental art – whether film, music, or otherwise - can. Most experiments fail. This one succeeds.
Stef on Sunday, July 21, 2019
Share