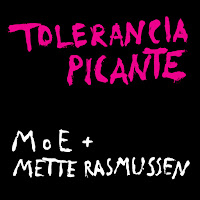 I picked this album up because I was (and still am) enthralled by MoE’s 2018 release with Lasse Marhaug. The sardonically titled Tolerancia Picante, however, is a different beast altogether and this beast is punk rock. The adjective, the attitude, and the aesthetics. Not pop-punk or post-punk or one of those derivations, but straight-up cacophonous, cantankerous in-your-face aggression…minus the power chords and fueled by free jazz curiosity and musicality.

“Tolerancia Picante” opens the album with a dense fabric of percussion, effects (motors, howling wind, spaceship sounds), and some catchy, but biting sax vamps. (This style is revisited near the end of the album on sludgy “The Story of No [Suite Part III].” “City Boy” sounds like a clarion call for an uprising out of the rubble of a non-descript but all too pervasive postindustrial landscape. The guitar screeches like frayed wires. The bass and drum stumble. Rasmussen’s sax and Guro Skumsnes Moe’s vocals shout (“City Boy you fucked up your choice of freedom”) over the wreckage. “Crysta! Dancer,” for instance, is somehow even more clamorous and conveys a sense of desperation and confusion. Moe’s thick Norwegian accent adds to the ominous atmospherics as she elongates and intones phrases in such a way that the lyrics – sometimes barely discernible to begin with – break down into their constituent, syllabic elements. This piece of dada freneticism is followed by another stand-out, “Introduction,” a rumbling dirge with an Ayler-via-Brötzmann saxophone elegy draped over a dense foundation of heavy strumming, feedback, and percussion.

The album fluctuates like this – between density and unfettered energy - for the entirety of its 40 minutes. Some pieces (“Strangle, Strangle, Strangle… “) have a call-and-response, stanza-blow out structure reminiscent of Sun Ra’s work on “The Creator of the Universe.” Some (“This Is Who We Are”) build from a series of short, declaratory sentences laid over at two-beat vamp into a craggy free-for-fall. Some (“Shardrach, Meschach, and Abednego”) are full on blow-outs worthy of early Wolf Eyes or (“Violently Passive [Suite Part II]”) doomy, atmospheric pieces that, even with their restiveness, would fit seamlessly into the Utech Records catalog. Still others (“I carry the Mother [Suite Part I]”) have oddly sonorous and howling vocals, bringing to mind a heavier, feedback-strewn Big Blood. And, at a pithy one minute and seven seconds with Moe’s barked vocal sloganeering (“I am no beggar unless you beg me to. I am no liar unless you lie to me. I am no sinner, unless you ask me to. Ask.”) over a simple pounding of bass, guitar, and drums, the concluding track, “Ask”, is as Crass as anything new I have heard in a long time.

In short, Tolerancia Picante is heavy, abrasive free-noise-punk at its finest. And, if this album is any indication, this ensemble must be absolutely wild live. Until they trek through New Orleans, however, I will happily settle for this recording.