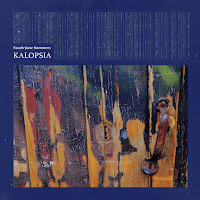 Sarah-Jane Summers may not be a familiar name. Classically trained, member of the Bozzini quartet, she is also trained in the typical Scottish Highland's type of folk music. She lives in Norway and is married to Finnish guitarist Juhani Sivola, and her musical output combines all this. This means that you may be in for some surprises.

"Kalopsia" is a solo album, with the artist playing both viola and violin, and consists of fourteen solo improvisations that clock around two to three minutes each. The first four tracks offer very modern, avant-garde soloing that explores timbre and adds rhythmic and technical complexities making them a fascinating listen. On the fifth track, Petrichor, she delves into folk music, sweet and gentle, like a lullabye, and it is the only composition that is not directly adventurous or avant-garde. It is is followed by Susurrus, a dark piece, barely recognizable as emanating from a violin, with muted scrapings creating an uncanny sense of dread, a comparable approach to the much deeper tension on the strings of Letophobia. Hiraeth is a multilayered melancholy piece.

Meraki is built around a repetitive phrase on several strings with a high-pitched tone dancing around it. Its title is a Greek word that describes what happens when you leave a piece of yourself (your soul, creativity or love) in your work, and this works is quite well illustrates her approach.

Each of the fourteen musical miniatures that she offers us here has its own character and story, and her art is so strong that despite the shortness of the improvisation, she manages to make it compelling and gripping.

Her first solo album, Virr, received positive acclaim. I think this one is even better.