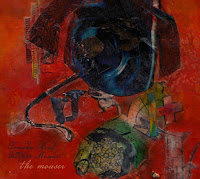 Having seen Tomeka Reid in April this year - at Glasgow's Counterflows festival, playing incredible sets, both solo and trio - I was worried that this album recorded in 2015 wouldn't match the enormity of what I'd heard live.

But fear not - within the first ten seconds, you’ll know this is going to be a special listening experience.

The story goes that Reid needed a place to stay whilst on tour in Italy, drummer/percussionist/studio owner Filippo Monico was recommended by bandmate Silvio Bolognesi, who agreed on the priviso that they play (and record) together - for the very first time.

Under these circumstances; recorded and then seemingly forgotten about for a couple of years - 'The Mouser' gives an intimate insight into the first meeting of this masterful inter-continental/generational duo.

As hand drumming gives way to subtly complex stick work blended with a hypnotic array of found-object percussion, the plucked cello tightens, only to descend into an actual loping bassline that Monico can't help but vocalise along with before caressing cymbals and evoking a beautifully slanted swing.

Moving out of this mode, the drums here sound like a pigeon trying to escape a room full of floating papers as Reid's deft, propulsive finger work on the strings moves the opening piece to a conclusion.

'Walk Within the Eye of the Storm' screeches, whistles, exhales and strums, proving once again that with the best Freejazz, one needs to move beyond the instruments to truly hear The Music, as cello and trap drums are almost indistinguishable to tell apart.

The second piece is more abstract and repetitious; the spatial affect of the recording space playing its role in the accumulative sound scape.

The title track opens with a bouncing - possibly detuned - bowed plucks sounding like a donso n'goniAfrican lute, before an evolving series of strummed half-chords, slides and oblique bass lines push against a minimalist snare.

'Wefting Through a Starry Sky' begins with an exploration of the cello's wooden body before Reid swoops into a plaintive melody weeping deep emotion, displaying her complete command of the instrument's potential.

At 3 mins 20 she bows a sustained two-note chord a semi-tone apart, ratcheting up the tension to the album’s most intense point into a siren call matched with floor toms, that quickly subsides into a call and response rhythm. Monico then has a solo of sorts - focused on the snare - it's possible to hear him breathing along in time, before Reid closes the recording’s most emotive tune, bowing high on the cello's bridge.

'Intimations of Things to Come' has more chase and play - an exuberant dance of hide and seek as Ms Reid spirals amongst the drummer's loose patterns, before drawing one last exhalation from her cello, bringing the album to a close.

So, why not the full five stars?

Because I have no doubt that this will be improved upon and only hope that the Duo album launch gig at NYC's Jazz Gallery - with Reid and the subtle and exceptionally talented drummer Tomas Fujiwara - has been taped for a future release.

Welcome aboard, Olle. It was really nice that we met at the Vision Festival this year, the conversations with you were really insightful. Congratulations for this interesting review, I'll definitely have to check out the album.