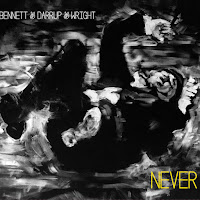 Sometimes we need to make things clear from the beginning and state our point of view. This is an amazing recording from three fine improvisers. Nothing less than five stars and I mean it. You all know by now about the great musician and thinker Jack Wright. Wright, who on Never plays saxophone, is always the artist willing to collaborate on an equal basis with musicians of younger generations. Here he plays with two low key improvisers. Ben Bennett on the drums and percussion has not seen so much publicity around his name, even though he fully deserves it. He manages to be an artist in demand from many below the radar collaborations, like a duo we recently reviewed here with Arrington De Dionyso. Zach Darrup has played together with both of the aforementioned musicians in duos. These are some fine recordings as well, while I cannot say I’ve listened to anything else from him.

The fact that they know each other and have built a communicative language really shows on Never. Their interaction is impeccable. Especially since Wright’s work through the years isn’t one that needs categorization, but as a reference point here would be European improvisation of the freest form from the early 70’s. It is very rare that you come close to such a dedicated interaction between musicians. They seem willing and eager to leave any trace of ego or willing for a personal exploration through the journey to uncharted waters that is collective improvisation.

From the very beginning up to the last second, more than hour later, Never impresses. They never ran out of ideas, they keep the energy flow really high, they never bore you even if you have listened a billion of improvisational recordings. The five star rating is no exaggeration, so all of you reading the above lines, go buy it.

Fotis, thanks for listening and I'm glad you enjoy the music!
We're doing our first tour with this trio in September/ October.
- zd